The UESPWiki – Your source for The Elder Scrolls since 1995
< Lore: Magic
Jump to: navigation, search
"And last, the light of Flesh, the illumination of Soul -- perception, thought, memory, imagination.... I summon thee, walker in Flesh! Flesh of true Flesh! From those waters of Oblivion which sire thy kind. Come to this altar. Join with this body. Quintessence of Flesh joined with the Essence of Flesh. Absolute in mortal. Immortal bound to contingent."
—Relmyna Verenim's binding ritual

Flesh Magic is an obscure and ancient form of magic, believed by some to be older than the world itself.[1] It is characterized by what practitioners call the "sixth element", otherwise known as Flesh.[2] According to legend, the element of Flesh was birthed in ancient times by the original five elements of Earth, Water, Air, Fire and Light when darkness turned into day and the Void took form. Said to have been hidden by virtue of its own self-awareness, it remains largely unknown and esoteric among modern societies.[3]

While Necromancy deals with raising the dead, Flesh Magic differs in that it involves creating life by binding an immortal Soul to an amalgamation of Meat, Blood, Bone and Breath—the essential components of true Flesh. Each ingredient serves a vital role in the creation of life. Meat is said to possess the desire to consume. Blood is the liquid nutrient that contains the essence of life. Bone gives shape and structure and Breath bestows movement and stirs the spirit.[3] Through many years of intensive labor, these four essential components of true Flesh can be isolated and grown into their mystical forms: Osseous Marrow, Dermis Membrane, Essence of Breath, and Blood Liqueur.[3]

These components, together known as the Essence of Flesh, serve as the vessel for the twisted creation, which is then bound to an Atronach's Daedric spirit (or vestige)[4] summoned from the waters of Oblivion, typically through a ritual. The Daedric spirit acts as the Soul, the final component known as the Quintessence of Flesh, which represents perception, thought, memory, and imagination. Joining the Essence of Flesh with the Quintessence of Flesh through a successful binding produces a living Golem, sometimes referred to as a Flesh Atronach, believed by practitioners to represent the element of true Flesh in its pure form in a similar manner to the Elemental Daedra of Oblivion.[3]

While the fundamentals of Flesh Magic are distinct from Necromancy, some mages consider them to be the same discipline.[5] Other times it has been classified under the school of Conjuration.[6] 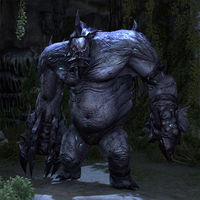 Flesh Magic was first recorded in translated ancient Aldmer texts of unknown provenance and authority.[7] At some point after the Ra Gada invasions began in 1E 808,[8] the Nedic mage Mahvia used the "flesh, minds, and souls" of four willing sacrifices to create an experimental flesh atronach, which would guard the city of Shada's Tear from Tarish-Zi's Anka-Ra.[9] Around 2E 230 Mannimarco experimented with Flesh Magic prior to his expulsion from the Psijic Order. On the island of Artaeum he created the first Flesh Colossus in a secluded laboratory before he was discovered and subsequently exiled.[10]

Flesh Magic was arguably most prominent during the Planemeld in the mid-Second Era, when many of Molag Bal's minions and cultists under the tutelage of Mannimarco summoned Flesh Atronachs of varying descriptions to aid in their schemes.[11] In later eras, the practice became almost non-existent. While some institutions, such as the College of Winterhold, allowed the study of some necromatic dark arts, Flesh Magic was largely reviled across Tamriel. Such is the rarity of the art that there have been only two known practitioners in modern times, both of which were said to be insane.[12]

The first was Relmyna Verenim, a member of the Mages Guild in the late Third Era who began researching the sixth element and conducting extreme experiments. She was expelled from the guild and was granted residency in Sheogorath's realm to continue her work.[2] Using Flesh Magic rituals, she created her crowning achievement—the feared Gatekeeper of the Fringe, a colossal Flesh Atronach who was charged with guarding the Gates of Madness in the Shivering Isles.[13]

The second was Calixto Corrium, a museum curator in Windhelm during the Fourth Era. After the death of his sister, he began researching methods to bring her back to life and uncovered the art of Flesh Magic. In his insanity, he murdered several young women in the city in order to collect their body parts for the binding ritual, but was eventually discovered and executed.[14]