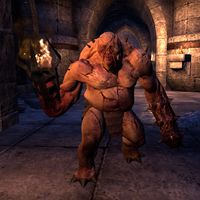 Flesh Atronachs are a type of Daedra made of stitched skin and muscle. They are often summoned by necromancers to aid them in battle. Flesh Colossi are similar creatures found in the Imperial City.