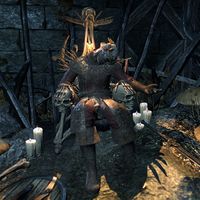 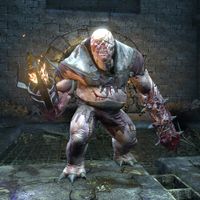 Emperor Leovic is a boss found in the Abyssal Depths section of the Imperial Sewers. During the fight, he will transform into a Flesh Atronach. He was formerly the Emperor of Cyrodiil a number of years ago, before being deposed by Varen Aquilarios.

A Worm Cult Dreadmage, Battlemage and Cryomancer are performing a ritual in front of the Emperor's corpse. The Worm Cultists surrounding his throne must be killed before you can face the former Emperor. His flesh atronach textures are unique, as his torn clothes are clinging to his swollen form.

His abilities at the start of the encounter are typical for zombies, and in no way unique.

His unique abilities come into play after he transforms, when his health falls to around 80%.

Debased Dragonfire
Atronach Leovic holds up his flaming arm and fires several bouts of accursed flames at you, quickly dealing moderate to severe flame damage.
Summon Zombies
Emperor Leovic summons several Imperial zombies to fight for him.
Contamination
When Leovic summons zombies, it leaves a lingering poison AoE that snare you and deal major poison damage.
Slam
Slams his arm on the ground, dealing moderate physical damage.
Punch
He hits you with his arm, dealing low physical damage.
Imperial Summons
Emperor Leovic roars, slowly drawing all players in range towards him and dealing moderate void damage. You can break free from this ability's effect. 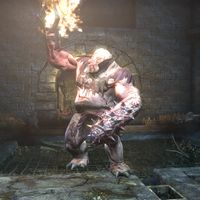 "The White-Gold Tower is mine!"
"The Longhouse Dynasty is eternal!"
"Thralls of Varen Aquilarios will die!"
"The Emperor is dead. Long live the Emperor!"
"By the power of the Ruby Throne, interlopers will die!"
"This rebellion will be crushed!"

Reeling attackers towards himself:

"Supplicants, come and pay homage!"
"By Imperial decree, I sentence you to death!"
"All subjects approach and pay respect!"
"All bow to the Emperor!"
"The Emperor sentences you to death!"
"Bring the prisoners before me, for my judgement!"
"Come to me and bask in the glory of the Empire!"

There is one Achievement associated with this creature.