The UESPWiki – Your source for The Elder Scrolls since 1995
< Online: Places: Summerset / Estates
Jump to: navigation, search

The College of Sapiarchs is built atop a literal maze of halls and corridors, a repository of ancient knowledge and royal ceremonies, as delineated in the many Scrolls of Praxis that all Altmeri monarchs must study before ascending the Throne of Alinor. 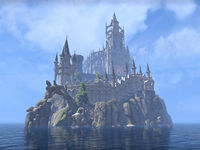 The College of Sapiarchs is an institution located on an island just west of the city of Lillandril. It is home to the Sapiarchs—Summerset's foremost scholars and Keepers of the Crystal Tower led by Sapiarch Larnatille.

A portal on the western edge of Lillandril provides the only means to access the college, which cannot be used before Proxy Queen Alwinarwe notifies Portal Master Astirhil of her permission in order for you and Valsirenn to enter and inform the Sapiarchs of a threat to the Crystal Tower.

When entered it turns out that the Court of Bedlam, through Mephala's Earl Leythen, invaded the college with Daedra and massacred most of the Sapiarchs there. 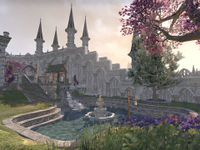 The well-tended gardens with a pond

Dead Daedra and Sapiarchs can be found here and there. Skavengers skitter across the battlements. The main entrance to the College, which is accessible after the related quest, lies up the grand staircase. The entrance to the Labyrinth lies at the base of the College, near the pool. 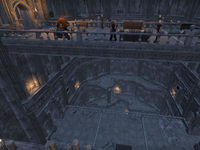 During the quest, you must traverse the labyrinth to enter the College. 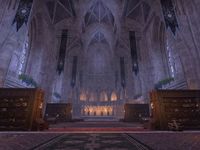 There is a Hoarvor Daedra in the great hall.

This office is located to the northwest in the College. A copy of The Crystal of the Tower lies on a table here.

This Online-related article is a stub. You can help by expanding it.
Retrieved from "https://en.uesp.net/w/index.php?title=Online:College_of_Sapiarchs&oldid=2191194"
Categories:
Hidden categories: