The UESPWiki – Your source for The Elder Scrolls since 1995
< Elder Scrolls Online: Places: Blackwood / Delves / Caves
Jump to: navigation, search

Bloodrun Cave is a cave full of undead situated in the northeast corner of Blackwood. An Argonian necromancer named Tumma-Maxath has taken up residence here and Mim-Jasa requests help protecting the remains of Shadowscales from him.

Beyond the cave system lies a former Dark Brotherhood sanctuary, which remained undisturbed despite nearby residents using the caves as a charnel pit. The sanctuary is visited during An Unexpected Adversary and is inaccessible before then. 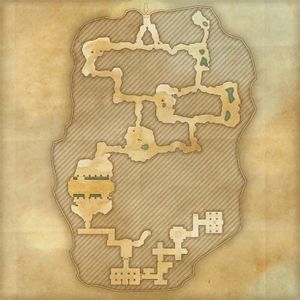