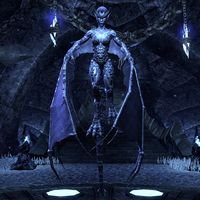 Molag Grunda is a Winged Twilight and the daughter of Molag Bal, found at Grunda's Gatehouse. She guards the Chasm, and will be the last line of defense after all the other enemies are defeated. She is described as being sarcastic and rude by Sir Cadwell, and apparently enjoys plucking out eyes and spleens. Molag Grunda is fond of her pet flesh atronach Tiny.

When you approach her, she sends her pet flesh atronach to attack you.

Molag Grunda: "Puny, wingless, mortal fools! I'll feast on your flesh after my little pet rips it from your bones!"

When Tiny is killed, Molag Grunda becomes enraged and swoops down from her perch to deal with you herself.

Molag Grunda: "You killed my darling creature! I'll tear out your hearts and serve them to my father on a silver platter!"