A Xivkyn general with a blue banner 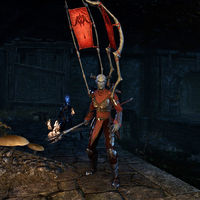 A Xivkyn general with a red banner

This article is about the public dungeon enemy bosses. For the group dungeon bosses, see Elite Guard.

The Coldharbour Elite Guard, also called the Xivkyn Elite or "Banners", are an extremely powerful group of Xivkyn located in the Imperial City Sewers who serve as Molag Bal's generals. They patrol various parts of the sewers in a looping path and will become hostile should they detect you or a group member, which makes them difficult to escape as they are not leashed. They are some of the most powerful enemies in the game and most often require a large group to defeat a single one.

The Elite can be distinguished by the large banners found on their backs, large amounts of health, and the glowing ring surrounding them that prevents stealth. The power of each general can usually be determined by the color of their banner, with red banners possessing more magicka-based ranged and AoE attacks, making them more powerful than their stamina-based blue banner counterparts, who use mostly melee attacks. Similar to the overland Patrolling Horrors, when a guard is killed, they will later be replaced by another member of the Xivkyn Elite who will patrol the same path. There are, by default, nine wandering generals in the sewers, with three in each alliance territory.

In the Barathrum Centrata, when every wave of generic enemies is defeated at one of the three inner portals, a general will spawn and must be killed to close it. Once three generals are defeated, the Simulacrum of Molag Bal will spawn. Since each portal is on a timer, it is possible that when the timer ends, the general will run back to the portal and disappear during combat, and the portal will be reset.

Banners of the Elite Guard

There are a few Achievements associated with this faction: