Imperial City: Daedric forces have taken the Imperial City, and all three alliances vie to take it back. Experience hours of all-new PvP and PvE gameplay, both above ground and below, plus two new dungeons, never-before-seen monsters, craftable item sets, and more! 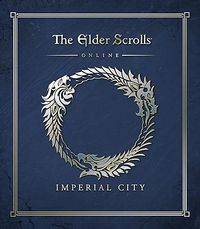 Imperial City is a PvP-oriented DLC that introduces a new region to Cyrodiil: the Imperial City, currently under Daedric occupation.

Imperial City has no associated loyalty reward. It's included with the Gold Edition of ESO and the Guilds and Glory bundle. An Imperial City Collector's Bundle was made available for 055005,500

during the Planemeld Palpitation event to celebrate the DLC's one year anniversary, and was available again for 033003,300

during the DLC's second anniversary event.

, the Imperial City DLC was made available to any player for free as of September 5, 2019.