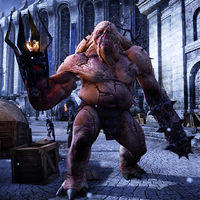 Flesh Atronachs are enchanted flesh golems animated by flesh magic or necromancy.[1][2][3] They are considered undead, categorized as reanimated abominations alongside skeletons and zombies.[2] A soul or Daedric vestige is bound to the flesh, and the husk is reanimated.[4][5][6] Some sources claim that flesh atronachs are Daedra,[7] and are believed to represent the element of true Flesh in a similar manner to Elemental Daedra.[1] They appear as a sewn-together conglomeration of skin and muscle, sometimes adorned with mystical symbols[5] or wearing an iron collar.[8]

Some flesh atronachs have several glowing runes and energy spots on their bodies, the color of which depends upon how powerful the atronach is.[8] The foreheads of such atronachs are known to hold an embedded Void Essence, a red gem with various alchemical uses.[9][10] Flesh atronachs from Coldharbour have azure plasm oozing from between their sutures.[11] They are healed by poison[12] and their magicka increases if hit by spells.[13] They emit an aura that damages opponents if they get too close.[12] Flesh Atronachs have the ability to hurl fire at their target.[14] Additionally, they can crush mortals flat with their arms, which can be massive stubs of flesh with rusted metal blades infused in its skin.[14][5][15]

Relmyna Verenim was obsessed with flesh atronachs animated by Daedric vestiges, which were a part of her research into the element of Flesh. Sheogorath brought her to the Shivering Isles to allow her to continue her research, and flesh atronachs spread throughout the realm.[16][17] The Gatekeeper of the Fringe was the result of her experiments.[16] The followers of Mephala are also known to utilize flesh atronachs, distinguished by their black and red mottled skin, reminiscent of Spiderkith.[18]

The Flesh Colossus is a larger, more powerful version of the flesh atronach. The first flesh colossus was created in secret by Mannimarco when he was still training as a Psijic monk on the island of Artaeum.[19] They were among Molag Bal's forces during the Planemeld.[20] Flesh colossi can taint the ground around them with wells of putrid disease and poison.[21]