The UESPWiki – Your source for The Elder Scrolls since 1995
< Lore: Bestiary: Z
Jump to: navigation, search 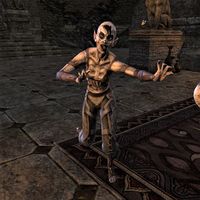 A zombie is a reanimated corpse, risen from the dead, mostly through the use of necromancy.[1] They can also come about through certain diseases such as the Llodos Plague.[2] When a necromancer wishes to create a zombie, they must take a corpse to a suitable site and enact rituals to resurrect the corpse.[1] As part of an ancient tradition, those wanting an apprenticeship to a necromancer will sometimes create a zombie and show it to their prospective teacher.[3] Zombies are also conjurable and mages can learn how to summon them from Oblivion.[4]

Zombies can come in many forms, and in various stages of decay, they don't even require a head, and sometimes zombies can be found missing various limbs.[5] Some zombies are known to vomit at people, as part of their attacks.[6] The bite of a zombie can pass on a rotting disease that if it isn't treated will turn the victim into a zombie.[7]:80 Zombies are also known carriers of disease, they are known to pass on the following diseases, Ataxia, Astral Vapors, Chanthrax Blight, Collywobbles, Greenspore, Rattles, Rust Chancre, Serpiginous Dementia, Swamp Fevers, Wither, and Yellow Tick.[8]

Worm Thralls are a unique form of zombie created by the Order of the Black Worm. Initially, "Worm Thrall" was simply the title applied to the order's lackeys.[9] The order has been known to turn people into Worm Thralls both as a punishment and as a method of preserving them for prolonged study. Notably, Vanus Galerion and several other past Arch-Mages of the Mages Guild were raised as Worm Thralls by Mannimarco.[10]

Bog Blights are a type of natural forming zombie that comes about when a xul-vaat, or grave-stake is removed from the corpse that it impales. When an Argonian dies, their corpse is laid to rest in the marsh, sometimes at the roots of the Hist. A xul-vaatis used to pin the corpse into the ground so it doesn't rise as an undead bog blight. Grave-stakes don't just prevent the corpses from floating to the surface of the bog. The deceased's story is carved upon their stake. Tales of their victories and defeats, tales from childhood, names of friends, dreams, and nightmares—a grave-stake tells those who see it about the corpse it impales.

Sometimes grave-stakes come loose, usually by being pulled from the mud by an unsuspecting or malicious individual. When this happens, a formerly staked corpse can rise from the dead as a bog blight. They are described as "dead-and-not-dead things that eat Nagas whole". They are dangerous in large numbers. Bog blights can be kept at bay with the use of pahnjees (or "fumers"), racks of oily, spoiled meat that mask a living person's scent from bog blights. Its uncertain how these undead form, but it was speculated that its something in the water that causes them to rise from the dead. In areas where Bog blights form, its said only the Naga can drink the water, where Bog Blights are submerged. Bog Blights are infamous for rushing at people and then exploding, possibly a result of their corpses being left out in the swamp water.