The UESPWiki – Your source for The Elder Scrolls since 1995
< Lore: Gods: I
Jump to: navigation, search 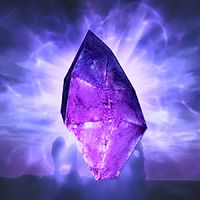 An Ideal Master as seen in Dawnguard

The Ideal Masters are the malevolent revenant spirits that rule the realm of Oblivion known as the Soul Cairn. Typically, they do not physically manifest themselves in the realm, instead preferring a type of omnipresence; however, Ideal Masters have been known to take the form resembling a soul gem, which can be used as a conduit through which the individual can communicate or drain the life essence of an approaching mortal. The Ideal Masters eternally seek souls to bring to the realm, where they become eternally trapped. The Masters view this as peaceful eternal life, although the undead who reside there view it as a curse. Individual Masters have names, so exalted that they cannot be spoken. They call themselves the Makers of the Soul Cairn, and were once mortals themselves.[1][2]

The Ideal Masters originated on Nirn in the Merethic Era[3] as an early order of sorcerers who practiced necromancy and trafficked in souls. They grew to become very powerful, and eventually found their physical forms to be unacceptably weak and limiting. After transcending these forms and becoming beings of pure soul-energy, the sorcerers entered Oblivion as immortals and selected an area of chaotic creatia to create the Soul Cairn, a realm ideal for their role as soul merchants.[1] Although immortal, they are reluctant to expend magicka as this "diminishes their eternity".[2]

Old retainers of an ancient Daedric-Human alliance are said to serve the Ideal Masters.The retainers achieved their state through ritual, seperating their spirits from their bodies. They strengthened and organized their spirits to the point where they achieved a form of eternal consciousness. Both the Ideal Masters and their servants are considered to be revenant spirits.[4] The Ideal Masters often come into contact with mortals. It is theorized that a soul trapped in a black soul gem is sent to the Soul Cairn if the gem is used to power an enchantment, there it must eternally pledge itself to the Masters.[5]

Black souls (i.e. those belonging to the sentient mortal races) are the most common type to be captured, although white souls and a Dragon soul are also known to reside in the Soul Cairn. Necromancers commonly summoned these trapped souls to Mundus, although the art had been lost by the Fourth Era. Necromancers seeking greater power would historically contact the Ideal Masters, and could gain access to armies of undead in return for souls, although oftentimes the necromancer would be deceived by the Masters who would then claim his soul as well. A notable early example of this would be the deal they made with the dragon Durnehviir, who became eternally trapped within the realm due to their deceit.[6]

The Masters only real connection to the Soul Cairn is through the magical gems that inhabit the realm. They generally manifest in one of two forms: as a small red crystal found "resting" in a coffin, through which the Master can communicate;[7] or as a giant pink crystal, often found hovering above a ruined structure and seemingly protecting treasure, through which the Master can drain the life essence of any mortal who approaches. The effect can be counteracted by ingesting a Soul Husk, a plant native to the realm which can protect one's soul.[6][8]

During the Imperial Simulacrum, the Daedric armies of Mehrunes Dagon captured the Battlespire and invaded the Soul Cairn. The Daedra planned to use as it as a waystation between their own realms and their newly-conquered domains. The Daedra killed the Masters' servants and plundered their treasure, although they also released the souls of several prominent mortal allies whom Dagon had betrayed into the realm. An apprentice from the Battlespire entered the realm, following the retreating army. Most of the Ideal Masters were unwilling to help the apprentice, but when they learned of the Daedric invaders who would supposedly continue to regularly pass through their realm, one Master instructed the apprentice on how to use the Emerald Gates to leave the realm and continue stalking Dagon's army. The apprentice used them to teleport to the Shade Perilous, and was eventually successful in halting the flow of Daedra through the Soul Cairn by forcing them to relinquish their hold on the newly-conquered realms.[7]