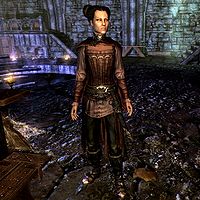 Valerica is a Nord vampire, wife to Lord Harkon and mother of Serana. She is found just outside the entrance of the Boneyard in the Soul Cairn when you go looking for her to find an Elder Scroll to be used by Lord Harkon. She does not have a very good relationship with her daughter because she hid her away from Lord Harkon for many years to keep him from retrieving her blood, which is needed for the ritual to block out the sun, despite the fact that Harkon is still unaware of that part of the prophecy. She also holds one of the Elder Scrolls needed for the prophecy. She is initially very disdainful and untrusting of the player, regardless of which side the player chose. She eventually realizes her error in judgement with Serana after a heated argument between the two, after which she has a bettered relationship with you and Serana, but is still somewhat unsure of your motives for awhile.

After completing Beyond Death and leaving the Soul Cairn, if you return and talk to Valerica, she can be asked to turn 5 Soul Husks into a Soul Husk Extract. She no longer offers this option after relocating to her study in Castle Volkihar.

After Harkon is defeated, if you return to the Soul Cairn and tell her so, she will return to Castle Volkihar and take up residence in her study. At the same time, she will replant her garden in the courtyard. You may ask her to make Bloodcursed elven arrows for you, but she will refuse politely.

Valerica wears a unique set of vampire royal armor with a pair of vampire boots. She is equipped with a ring of regeneration, a necklace of frost suppression, and an ebony dagger.

You first meet Valerica while she is behind the barrier in her prison.

Serana: "Mother? Mother!"
Valerica: "Maker... it can't be. Serana?"
Serana: "Is it really you? I can't believe it! How do we get inside? We have to talk."
Valerica: "Serana? What are you doing here? Where's your father?"
Serana: "He doesn't know we're here. I don't have time to explain."
Valerica: "I must have failed. Harkon's found a way to decipher the prophecy, hasn't he."

Valerica: "Wait a moment... you've brought a stranger here? Have you lost your mind?"
Serana: "No, you don't..."
Valerica: "You. Come forward. I would speak with you."

Regardless of which side you're on and how you answer Valerica, the conversation continues.

That's why I'm here for the Elder Scroll.
"You think I'd have the audacity to place my own daughter in that tomb for the protection of her Elder Scroll alone? The scrolls are merely a means to an end. The key to the Tyranny of the Sun is Serana herself."
What do you mean?
"When I fled Castle Volkihar, I fled with two Elder Scrolls. The scroll I presume you found with Serana speaks of Auriel and his arcane weapon, Auriel's Bow. The second scroll declares that "The Blood of Coldharbour's Daughter will blind the eye of the Dragon.""
How does Serana fit in?
"Like myself, Serana was a human once. We were devout followers of Lord Molag Bal. Tradition dictates the females be offered to Molag Bal on his summoning day. Few survive the ordeal. Those that do emerge as a pure-blooded vampire. We call such confluences the "Daughters of Coldharbour.""
The Tyranny of the Sun requires Serana's blood?
"Now you're beginning to see why I wanted to protect Serana, and why I've kept the other Elder Scroll as far from her as possible."
Serana underwent this ritual willingly?
"It was expected of her, just as it was expected of me. Being selected as an offering to Molag Bal is an honor. She wouldn't have dared turn her back on that."
Coldharbour?
"It's what some call the domain of Molag Bal. His place in Oblivion."
Are you saying Harkon means to kill her?
"If Harkon obtained Auriel's Bow and Serana's blood was used to taint the weapon, the Tyranny of the Sun would be complete. In his eyes, she'd be dying for the good of all vampires."
I would never allow that to happen.

Serana believes in me, why won't you?
"Serana?"

After speaking with Valerica, she turns to speak to Serana.

She will turn to speak to you after their argument.

"Your intentions are still somewhat unclear to me. But for Serana's sake, I'll assist you in any way that I can."
Do you have the Elder Scroll with you?

The quest will update after this conversation, regardless of whether or not you've taken the barrier down. You can ask her a few more questions.

If I leave the Soul Cairn, can I safely return?
"As you've been traveling in the Soul Cairn, your body has become attuned to it. Let's just say a tiny part of you rubbed off on it, and in its place, a bit of the Soul Cairn filled the void. You should find no difficulty using the portal any longer."
How did you become imprisoned here?

"When I entered the Soul Cairn, I had intended to strike a bargain with the Ideal Masters, the custodians of this place."
What was the bargain?
"I requested refuge in the Soul Cairn, and in exchange, I would provide the Ideal Masters the souls that they craved. If I had foreseen the value they placed on my own soul, I would never have come here."
They tricked you.
"The Ideal Masters unleashed their Keepers and sent them to destroy me. Fortunately, I was able to hold them at bay and retreat into these ruins."
You became trapped.
"Unfortunately, yes. Since the Keepers weren't able to claim my soul, they had their minions construct a barrier that I'd never be able to breach."
You've been imprisoned here for all this time?
"Time has very little meaning to me. Consequently, it has little meaning to the Ideal Masters as well. I suppose you could call this the ultimate waiting game, each watching the other to see which will give in."

Who are the Ideal Masters?

"I know very little about them. They're mystic entities that lord over the Soul Cairn, controlling every aspect from its fabric to its appearance."
What do they resemble?
"Well, some necromancers believe they are the crystalline structures dotting the Soul Cairn. I believe there's more to it than that."
How so?
"I think they transcend what we perceive as a physical form. Perhaps they were once corporeal beings, but they've obviously reached a point where they no longer require a tangible presence."
And the crystals?
"Conduits through which the Ideal Masters speak to their underlings and feed on their victims."
Why would they require sustenance?
"The Ideal Masters's weakness is their insatiable hunger for pure souls. It's the reason for the Soul Cairn's existence, and the only leverage a necromancer has when bargaining with them."
What do the Masters provide in return?
"The ability to summon powerful undead guardians as one would conjure an atronach or daedra. However, the majority of necromancers that are foolish enough to enter into a bargain with the Ideal Masters wind up here... as harvested souls."

Why haven't you pursued the prophecy?

"Harkon's vision is a world plunged in eternal darkness where the vampire can flourish and never again fear the "tyranny of the sun." What he fails to realize is how much attention would be called to our kind if the prophecy came to fruition."
What sort of attention?
"If eternal night fell, there are many who wouldn't stand for it. They would raise armies in attempts to return things to normal. The order of the day would be our destruction until every last vampire was hunted down and eliminated."
So you prefer living in the shadows.
"I do. It's how the vampire has survived for millennia, and the only way we can continue to survive in the future."

"Forgive my astonishment, but I never thought I'd witness the death of that dragon."
What makes you say that?
"Volumes written on Durnehviir allege that he can't be slain by normal means. It appears they were mistaken. Unless..."
Go on.
"The soul of a dragon is as resilient as its owner's scaly hide. It's possible that your killing blow has merely displaced Durnehviir's physical form while he reconstitutes himself."
How long will that take?
"Minutes? Hours? Years? I can't even begin to guess. I suggest we don't wait around to find out. Now, let's get you the Elder Scroll and you can be on your way."

Once you've retrieved the scroll:

Valerica: "Now that you've retrieved the Elder Scroll, you should be on your way. If there's anything I can do before you depart, you must let me know."

If you allowed Serana to Soul Trap you to enter the Soul Cairn, you may ask:

Can you help get my soul back?
"So my daughter applied some of the lessons I taught her about necromancy, did she? Don't worry, I think I can help you."
Good, I could use all the help I can get.
"Your soul essence was trapped inside a gem. When you and Serana entered the Soul Cairn, it was "given" to the Ideal Masters as payment. You simply need to retrieve the gem. The moment you touch it, your soul essence will be restored."
Any idea where it could be?
"There's an offering altar not terribly far from here. I'm willing to bet that the gem you're looking for is there."

You can ask her more questions after asking about your soul.

"Is there anything else? Could be your last chance."
You're staying here?
"I have no choice. As I told you before, I'm a Daughter of Coldharbour. If I return to Tamriel, that increases Harkon's likelihood of bringing the Tyranny of the Sun to fruition."

Before you leave you can continue to ask her questions, including a new one:

Why don't you come back with us?
"Even if I could, it would only serve to hinder your efforts. Harkon would likely sense my return to Tamriel. The last thing you need right now is a trail for him to follow."
You said "even if I could." Why?
"Like Serana, I am a Daughter of Coldharbour, a vampire offspring of Molag Bal. My presence in Tamriel would simply double the risk that Harkon could complete the prophecy."
And if Harkon failed?
"The only way I'd even consider returning to Tamriel was if Harkon were not only to fail, but to be destroyed."
You hate him that much?
"You must understand; he's no longer the man I married all that time ago. He's obsessed... insane. Everyone around him fears him as they would a rabid dog. For all of this to end, he must die."

You can tell her that it's safe to go home after you defeat Lord Harkon. If you speak to her in her study after she arrives, she expresses relief.