Conjuration, one of the five schools of magic in Skyrim, is the school dedicated to summoning creatures or objects the caster desires. Increasing this skill reduces the magicka cost when casting Conjuration spells. Historical information about the School of Conjuration is provided in the lore article. The Conjuration skill tree has a total of 15 perks, requiring a total of 16 perk points to fill.

In-game Description: The School of Conjuration governs raising the dead or summoning creations from Oblivion. This skill makes it easier to cast these spells as well as Soul Trap and bindings.

Conjuration is strongly focused on combat, but in a rather different way to other schools. It has six main areas: 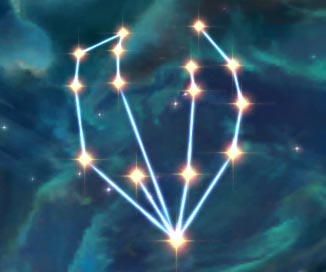 A list of standard Conjuration spells can be found on the Spells page. The following individual effects are all considered to be part of the school of Conjuration (see the individual effect pages for full details on availability; the Magical Effects article also provides a summary):

The following races have an initial skill bonus to Conjuration:

Repeatedly casting high-duration, low-magicka Conjuration spells (Bound Sword for example) while in a combat situation will also quickly increase your Conjuration skill (some spells such as Bound Sword can be equipped in both hands for quicker leveling). Also note that the Bound Sword and Bound Dagger provide more than four times the Skill XP of the Bound Bow (see bugs). So while the Bound Bow is a powerful weapon (particularly in the beginning and mid-game), grinding for XP is better done with the Bound Sword or Bound Dagger. An effective method for doing so very quickly:

You can also cast summon spells repeatedly in areas where the summon and the enemies can't reach each other (e.g., caged animals, areas with high drop-offs).

To grind character levels after already maxing Conjuration at least once, reset it to 15 and summon any Thrall mid-combat to earn a huge amount of experience, especially at low Conjuration levels. This requires a good set of enchanted gear to counter the high magicka cost but can be used to gain character levels extremely quickly.

An even faster way to level, although one that exploits a bug, would be to find any sort of dead body and repeatedly cast Soul Trap on it with dual-cast; you can go from level 40 to 91 in less than 10 minutes. If you stand near the big magic well in the College of Winterhold, you will gain additional magicka regeneration. If this is combined with the Altmer's Highborn racial power, your magicka will regenerate extremely quickly.

Soul Trap on your Horse[edit]

Alternatively, repeatedly cast Soul Trap on your horse - unlike followers, your horse will not become hostile (or run away) no matter how many times you attack it.