Skyrim: A Scroll For Anska

The UESPWiki – Your source for The Elder Scrolls since 1995
< Skyrim: Quests: Side Quests / Dungeon Quests
Jump to: navigation, search

High Gate Ruins is a remote Nordic ruin on the snowy tundra east of Solitude, near the shores of the Sea of Ghosts. When you enter, it soon becomes clear that someone visited the ruin recently, as the residing draugr have already been killed. Proceed into the first room and you will meet the person responsible, a Nord wizard named Anska. When approached she will introduce herself and ask if you are there to help her as she has finally located Vokun's Crypt. She then explains her goal, namely to locate a special scroll that could link her family blood all the way back to the legendary Ysgramor. She will also briefly describe Vokun as "Some old priest buried here long ago.", hinting at her lack of research and explaining her need for help. She fears the old priest could awaken and prove too powerful a foe, so she wants you to lead her through the ruin and help her fight the opposition. Accept her request and the quest will start. 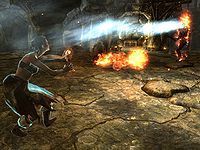 Anska is not your average follower and you will have to escort her safely through the ruin; she is, however, capable of taking care of herself using a variety of leveled wizard spells, so keep an eye out and stay upfront as you proceed into the dungeon. Take the northern tunnel to a huge chamber infested with leveled draugr. Claim some minor loot from the chest in the alcove, then head upstairs and locate the iron door leading north where three more draugr will attack. Go through the room with the alchemy lab and a few useful potions. The next tunnel contains a pressure plate triggering a spike wall, so make sure Anska gets through unharmed. A lever puzzle awaits in the next room, so take a thorough look at the symbols above the southern ledge. From left to right, they are: Eagle—Whale—Fox—Snake. Look around the room for the levers, all of them on pedestals with corresponding symbols. The two first levers are upstairs while the last two are on the ground floor. When all four levers are pulled in the right order, the grate in the middle of the room will disappear, so head downstairs and enter the catacombs through the door.

Only one draugr will attack you in the first section of the catacombs and a slide will lead you down to another catacomb area with more draugr. A chest can be found in an alcove, but watch out for the pressure plate and the corresponding darts. Before long, you will reach a room with a leveled soul gem resting on a weight sensitive plate, which releases two draugr from the adjacent coffins if triggered. The locked door to the right contains a chest behind it. Continue into a hallway filled with ancient carvings and numerous pressure plates on the floor, triggering darts or spear traps, then proceed into another puzzle room. Facing the lever, two stone walls cover hidden doors, so pull the lever and watch the wall to the right disappear, then fight the boss-leveled draugr guarding another lever. Pull that lever and the door to the left will open and release yet another boss-leveled draugr. Pull the lever behind him, then head through the now-opened entrance to the east and into Vokun's throne room. 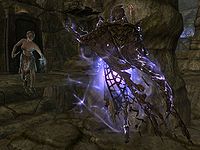 Before the throne room, a hallway offers a few potions. As soon as you open the next door, the dragon priest Vokun will burst out of his sarcophagus and use his staff of fireballs to attack you from a distance. Anska will keep her distance from Vokun, but will use her ranged attacks to help out. Defeat the priest and claim his unique mask and his staff from the remains. Proceed to the chamber to the east, where you will find a word wall with a word for the Storm Call Shout. The nearby table holds the sealed scroll for Anska, so pick it up and hand it to her. She will be overwhelmed with joy and hand you the unique spell tome for learning the spell Conjure Flaming Familiar as a reward. Additionally, a boss-leveled chest can be found on the upper level to the north, in an alcove right next to the shortcut back to the first zone of the ruin. Anska will stay behind and try to decipher the scroll indefinitely.