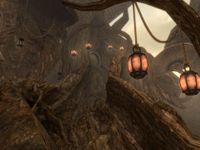 Pathway to the main tower

It is located in the settlement of the same name, on the southeast coast of Solstheim, south of the Sun Stone, east of Fort Frostmoth.

These quests are available after you've spoken to Neloth during Reluctant Steward, though they become unavailable while you are looking for a replacement steward.

The following quest becomes available on completing The Fate of the Skaal.

The following quest becomes available on completing The Gardener of Men. 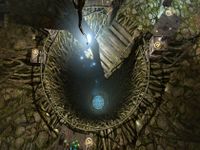 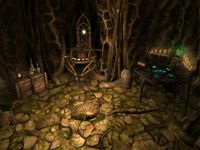 The entrance is reached by climbing a smooth ramp formed by the roots of the massive fungus, grown by Neloth using Telvanni magic, from the spores of the mighty fungus trees of Morrowind. Upon entering you are faced with an enchanted way to float up and down to and from the entrance at the base to and from the living quarters above. Care must be taken as it is possible to fall and die, and followers should be asked to remain outside--(see Bugs). The center of the tower is an opening where the magic occurs, with a railing around the edge and the living quarters arrange around this.

On the first visit there is a circular door opposite where you land when you float up that is locked and requires a key. The door prevents access to Neloth's staff enchanter and an arcane enchanter. It is possible to buy unenchanted staffs from Neloth and create your own staffs using the staff enchanter, but only if you prove useful to Neloth by completing a quest. This room also contains a Black Book titled The Hidden Twilight reading this will initiate the quest of the same name. To the left of the landing point, against the railing is a table covered with large smelt-able Dwemer items like Solid Dwemer Metal, with a second table filled with similar Dwemer items nearby. There are crates and tables both against the railings and the outer wall, with many potions, poisons, soul gems, ingredients and scrolls, including many pieces of canis root; as Neloth like canis root tea, brewed by his steward.

To the left of the room containing the staff enchanter are two tables, one is covered by a map of Solstheim, while the second is covered by a map of Skyrim. To the east is a storeroom filled with an unlocked chest containing minor loot, and sacks and barrels of food. To the left of this is an area set back with a chair and stacks of crates with an owned bed roll on the ground in front with another unlocked chest and a bottle of wine among empty wine bottles. To the north is a circular doorway to a bedroom containing a single owned bed with both full and empty wine bottles all over the place. To the northwest is a table with a built-in arcane enchanter. There are several fungi growing on the floor around the tower mainly fly amanita and white cap fungi. Following the completion of the quest Healing a House, the withered part of the tower will be replaced by a prison containing two spriggans. 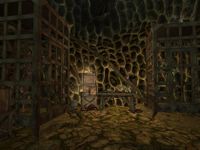 The prison for two spriggans