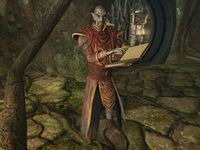 "Now, it's only a rumor of a whisper of a conjecture."

After completing the quest The Gardener of Men, Tel Mithryn master wizard Neloth will ask you several questions regarding your encounter with Hermaeus Mora. If you have yet to locate any Black Books, Neloth will finish his interrogation with an offer: "Now all that's left are these Black Books, waiting for another ambitious fool to be lured into Hermaeus Mora's clutches. Speaking of which... I think I've located another book, if you're interested. Here, let me show you." This will immediately start Lost Knowledge, a quest divided into three parts, but only if you have yet to discover the Black Books hidden in White Ridge Barrow, Benkongerike, and Raven Rock Mine.

If you miss out on his first offer the first time, you can ask him if he has found other Black Books, to which the wizard will respond: "Yes. Hermaeus Mora is devious, but then so am I. Now, it's only a rumor of a whisper of a conjecture. But I think this is the place. Now, hurry. That book might contain the final secrets of Xarxes, for all we know." Every time you return to Neloth with a Black Book, he will make a copy and let you keep the original. The reward will always be a leveled amount of gold, and his special thanks: "Excellent! I'll just make a copy for myself. It's far too dangerous to carry the real book around. Of course, I'm sure you can handle yourself. Of course you can. Of course. Now, take this for your efforts, and we'll call the matter closed." 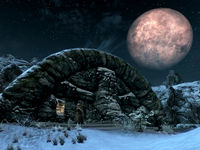 White Ridge Barrow is an ancient Nordic ruin located in the snowy tundra of northern Solstheim, straight south from the Mortrag Peak landmark. Upon entering, you will find two bed rolls and two reavers lying in a pool of their own blood. Activate the door bar and open the wooden door and another dead reaver will fall into the room. Proceed down the tunnel and find more dead reavers, along with two dead albino spiders. Follow the circular path to the west and head down the spiral staircase. You will encounter more spiders, both albino and flame cloaked spiders in what is seemingly a giant spider nest. Locate the woodworks to the east and a strange-looking bandit, with a spider attached to the neck, will attack. Jump down into the room below and consider the northern path for a bit of extra loot and a fight against a boss-leveled draugr. Head north and fight yet another spider-infused bandit. Follow the northwestern tunnel and fight the spiders on your way. You will pass a chamber with two ruby geodes and a heart stone deposit and then reach the door to the next zone, White Ridge Sanctum.

The Sanctum kicks off with two dead draugr, and, behind the door, a huge chamber with several jumping flame spiders along with even more odd bandits with spiders attached to the neck. You will also encounter Merilar Rendas, a hostile sorceress who will throw jumping flame spiders at you. Defeat her and investigate her body for some really useful items, including her journal, telling the tale of how she slowly turned insane on her brother, thinking he would take credit for discovering the spiders. She also carries a cage door key. Claim the key and locate the wooden stairs to the northeast. The room ahead is filled with spiders, so dispose of them and head up to the cage and unlock it. Inside, you will find Servos Rendas dead, carrying his journal. It describes how he, along with Merilar, discovered the mind-controlling spiders and how Merilar slowly went insane from the fumes caused by the experiments. The cell also hold the spider experiment notes, with Servos' detailed recipes from creating special spiders from albino spiders, along with the device needed to create spiders (please see this article for details). The cage key also fits in the lock of the cobweb-covered door to the north, where you will find no less than four spider-controlled bandits behind a barricaded door, all of them obviously experimental subjects. 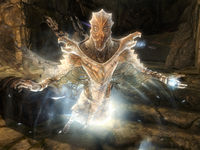 Return to the chamber where you met Merilar Rendas and head south. Remove the spider web and proceed through the tunnel into a huge chamber where the chanting from a word wall can be found. As you approach the wall, the dragon priest Dukaan will burst out of his sarcophagus and attack. He uses a unique spell called Frost Stream and regular Frost Cloak spells and can be a tough opponent. After the battle, claim his mask and a boss-leveled amount of gold and go to the word wall and get a word for the Cyclone shout and claim the contents of the boss chest. Lastly, a pedestal holds the target of the quest, the black book The Sallow Regent. Reading it will start the black book quest.

Once you return from the realm of Hermaeus Mora, head back to the chamber with the caged and deceased Servos Rendas and follow the path leading northeast from the cage. You will come across a ladder and a locked trap door. Use the cage key to open it and you will emerge outside, in a small shack a good ways south of the initial entrance to White Ridge Barrow. Lastly, head back to Neloth for your reward and the next task, a trip to Benkongerike. 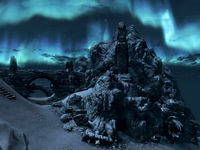 Benkongerike is an icy cave southeast of Saering's Watch. The exterior decorations reveal that the cave is inhabited by rieklings. Enter the cave and head down the slope and keep an eye out for a narrow tunnel to the right, leading to a locked chest with some minor loot. Before long you will arrive in a huge chamber where four rieklings will attack. Dispose of them and proceed in a southwestern direction where you will encounter a bristleback and a riekling firing at you from a small tower. Take the southern tunnel and follow it until you reach a camp with three rieklings. Proceed forward and defeat two rieklings bursting out of barrels and locate the tunnel leading northeast and beware of the three tripwires triggering claw traps.

At this point you will arrive in a huge chamber, complete with an entire riekling village built upon pillars connected with hanging bridges. You will be attacked by numerous rieklings here so fight your way through them and stay on the bridges. Falling down can damage you, but will net you some additional treasure. After traversing the bridges, find the tunnel leading east. The surroundings will now resemble an ancient Nordic ruin, although three rieklings will burst out of their barrels and attack. After the battle, help yourself to some useful potions on the shelves, then enter Benkongerike Great Hall. 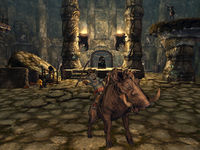 The Great Hall starts with an empty room with some common books on shelves and a riekling tent filled to the brink with copies of both volumes of The Lusty Argonian Maid. Among the pile, there is a copy of the Spell Tome: Telekinesis. Take the wooden spiral staircase upstairs and follow the corridor leading north. Behind the locked door is a boss-leveled chest, the Benkongerike key on a pedestal, and a rare copy of Dragon Language: Myth no More on another pedestal. Take the path leading east until you reach a huge chamber filled with woodworks with several rieklings roaming around, some of them on the ground floor, others on the bridges above. You will also encounter a riekling riding a bristleback. Search the chamber for some treasure, including a stalhrim deposit, and head south towards the gate and a rune totem puzzle. Three of the rotating symbols have the correct symbol above them, so turn them appropriately. The last one (to the left of the gate) has no symbol, but the correct symbol is the whale. Head inside to a word wall with a word for the Cyclone shout and some boss-leveled treasure from the chest. Lastly, head east through the narrow tunnel until you land in a small room with the Black Book Untold Legends. Pick up the book and you will start the Black Book quest. Once you have the book in your possession, find the door leading back to Benkongerike and return to Neloth for your reward and your next task, a trip through Raven Rock Mine.

The third and final Black Book, The Winds of Change, is found in the depths of Raven Rock Mine. However, you will have to start and complete the quest The Final Descent to gain access to the book. Please see that article for a complete walkthrough.