Skyrim:Put A Fork In It

The UESPWiki – Your source for The Elder Scrolls since 1995
< Skyrim: Staff of Sheogorath: Quests
Jump to: navigation, search 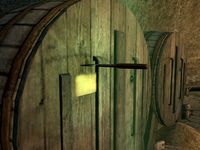 The mysterious message from Sheogorath

Once you've installed the Staff of Sheogorath Creation, you will receive this quest and be instructed to travel to Solstheim. Upon arriving on the island, you will be directed to The Retching Netch cornerclub in Raven Rock. A mysterious note can be found pinned to a keg on the ground floor of the cornerclub, along with the Fork of Horripilation. The items will be hard to miss, as they are surrounded by a green glow before you approach.

The note outlines a proposed combat challenge from Sheogorath, the Daedric Prince of Madness. You are instructed to use the fork to kill two specific bull netches on Solstheim, and recover two "familiar" artifacts from their bodies. Specifically, you will need to recover the Branch of the Tree of Shades and Ciirta's Eye, two items which originally appeared in the Symbols of Office quest in Shivering Isles.

You must take the fork in order to accept Sheogorath's combat trial. Note that while the fork is literally a kitchen utensil and has very low damage, it is neither generic cutlery, which is not a weapon, nor the harder to find fork weapon, which is weapon type "other" - it actually has the dagger weapon type, allowing your skills and perks to interact with it normally (e.g. it will make no noise when sneak attacking), although both fork weapons do the same base damage of 1. It also weighs 12 times as much as a normal fork, equivalent to the weight of a Daedric Dagger. It has no enchantments.

The first bull netch is located close by, on a small volcanic island directly west of the Earth Stone. Kill the beast as instructed and claim Ciirta's Eye from its corpse. The second netch can be found due east of Skaal Village, next to an icy waterfall. It will drop the Branch of the Tree of Shades when killed. Once you have obtained both artifacts, you will need to use them to craft your true reward: the Staff of Sheogorath.

Once you have obtained the necessary crafting ingredients and access to the Staff Enchanter, you can craft the Staff of Sheogorath to complete the quest. The staff has a powerful area of effect paralysis enchantment.