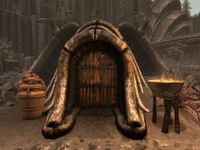 The Retching Netch is a cornerclub near the docks in Raven Rock. It is located next to Alor House and across the street from Glover Mallory's House.

It is owned and operated by Geldis Sadri who sells food and drinks and rents out beds for 10 gold. It consists of one area, The Retching Netch, which is divided into a ground floor, the taproom, and the private rooms.

The Retching Netch got its name several years ago, when Geldis saw one of his patrons staggering around the docks with a bottle of sujamma while naked and singing loudly. A netch came over the Bulwark, and the naked man threw the bottle at it. The bottle broke on the netch, which began tilting as it floated, until finally it vomited. 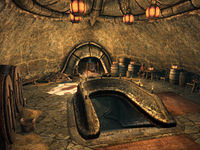 Like most other buildings in Raven Rock, the Retching Netch consists of a small ground floor area, while the basement is spacious and contains the taproom and the rooms for rent. The ground floor is circular and is where you can find mercenary-for-hire Teldryn Sero around the clock, right next to the roaming fireplace and the cooking pot where the cook Drovas Relvi operates. Along the southern wall is a table with a bottle of shein, while Teldryn's table holds another bottle of shein and a bottle of sujamma. Following the northern wall is a food barrel, and three more bottles of shein, divided on a table and two barrels. With the Staff of Sheogorath Creation installed, the Fork of Horripilation and a Mysterious Note can be found pinned to a keg on this level, surrounded by a green glow. 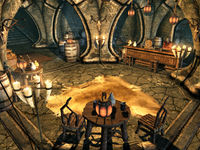 Down the stairs is the huge taproom with numerous tables for the regulars, as well as four rooms reserved for paying or permanent residents. At the foot of the stairs are four food barrels and three urns, all of them empty. Following the wall in a clockwise direction are several stacked barrels, six of which contain food. Three more barrels, two of them with bottles of shein on top, surround the entrance to a small storage room behind the bar, with three more food barrels. Two huge brewing vats stand in the southwestern corner, while two food barrels sit between a pillar and the huge kegs to the left of the two rooms in the western hallway. In the northwestern corner of the taproom is another food barrel and a set of shelves with five bottles of shein and all three volumes of History of Raven Rock. Next up is another hallway leading to two private rooms, with a table of shein nearby.

The center of the taproom has a table near the northwestern pillar with one bottle each of sujamma and shein. Next to the table are two food barrels. Another bottle of shein can be found on the table near the northwestern pillar. To the south is the bar, where Geldis Sadri offers his services and chats with the regulars. Two bottles of sujamma and one of shein sit on the bar, while the shelves behind it hide an East Empire Company strongbox and a coin purse. There is also a tray with three bottles of shein and two of sujamma. 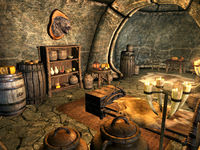 The room you can rent is one of the two rooms in the western hallway, specifically the one on the left. It is filled with goodies for the paying customer, including three urns and a barrel with food, two chests with minor loot, and lots of food. On top of the food barrel sits a sliced goat cheese, and, on the barrel next to it, a loaf of bread and two eidar cheese wheels. Opposite the bed is a set of shelves with a copy of The Reclamations, a goat cheese wedge, a potato, a green apple, some ash yams, two eidar cheese wheels, two bottles of shein, a potion of stamina, a potion of healing, and two bowls of moon sugar inside some baskets. Another ash yam sits on the nearby table, next to an eidar cheese wedge and a huge sliced goat cheese. Lastly, a table along the southern wall holds three ash yams, another sliced goat cheese, and a coin purse. The neighboring room belongs to Drovas Relvi and contains an urn with food, a tray with three ash yams, and a bottle of sujamma on a table.

The two rooms in the northern hallway are sparsely decorated and one of them is locked at all times. The first room on the left is unlocked and contains Geldis Sadri's owned bed, with a chest at the foot, a small table with a bottle of shein, some ash yam, and a slice of bread. Opposite the table stands a set of shelves with two bottles of shein and a copy of the quest-related tome Deathbrand. The apprentice-locked room belongs to Mogrul and contains some shelves with both volumes of The Red Year and a bottle of shein. Another bottle can be found on a small table, along with some bread. At the foot of the owned bed is a chest.