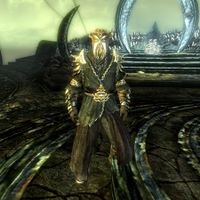 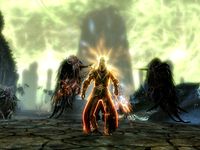 "Who are you to dare set foot here?"

Miraak is the primary antagonist of the Dragonborn add-on for Skyrim. He is the First Dragonborn recorded in history. He ruled over the island of Solstheim, where a large temple was dedicated to him.

He once served as a leader of the Dragon Cult and possesses a Dragon Priest Mask called Miraak, given to him by the dragons. At some point, he sought out the teachings of Hermaeus Mora, the Demon of Knowledge, and became his champion. Hermaeus Mora taught Miraak the power to bend the will of dragons. Using this knowledge and his innate ability to devour the souls of dragonkind, he turned on his winged overlords and killed a great number of them. Three Dragon Priests, Ahzidal, Dukaan and Zahkriisos, joined him and became his three most powerful servants, called the "Acolyte Priests". Following this, dragons razed his temple in retaliation. Hermaeus Mora protected his new champion, though Miraak became trapped in the Daedric Prince's realm. For more information, see the lore article.

He wears a set of unique robes, gloves, boots, and his eponymous mask. In combat, he primarily utilizes destruction magic and dragon shouts. He also wields two unique weapons: a sword and staff.

After disappearing into Oblivion since the last time Dragons roamed the lands, Miraak is planning his return to conquer Solstheim once more. This is evident by the fact that anyone around an All-Maker stone becomes enchanted and enslaved by Miraak's power, causing them to mindlessly chant, erect shrines to Miraak, and rebuild his ancient temple. When you ask inhabitants around Solstheim whether they know of Miraak, most will say that they have heard of the name, but cannot quite say where; some will become confused and mildly upset at the question and ask to end the conversation.

Miraak also sends cultists to Skyrim in order to hunt down and kill you. Upon being confronted by the Cultists for the first time, the following exchange will occur, starting with "You there! You're the one they call Dragonborn?"

Upon reading the Black Book: Waking Dreams, you will be teleported to Apocrypha just in time to hear Miraak say "The time comes soon when..." Miraak will then acknowledge you by saying "What? Who are you to dare set foot here? Ahh... You are Dragonborn. I can feel it. And yet..."

At this point his dialogue will differ depending on how many dragons you have slain.

Regardless of which line he speaks, Miraak will always follow with "You have no idea of the true power a Dragonborn can wield!" He will then demonstrate the Dragon Aspect shout to you, and say "This realm is beyond you. You have no power here. And it is only a matter of time before Solstheim is also mine. I already control the minds of its people. Soon they will finish building my temple, and I can return home." Miraak will turn to the four seekers and say: "Send him/her back where he/she came from. He/She can await my arrival with the rest of Tamriel." The seekers will then shower you with their Seeker Drain spell. While you slowly lose consciousness, you can see Miraak mount Sahrotaar and fly away.

At the Summit of Apocrypha[edit]

Upon your arrival with Sahrotaar, Miraak will say "Sahrotaar, are you so easily swayed? No. Not yet. We should greet our guest first. And so the First Dragonborn meets the Last Dragonborn at the summit of Apocrypha. No doubt just as Hermaeus Mora intended. He is a fickle master, you know. But now I will be free of him. My time in Apocrypha is over. You are here in your full power, and thus subject to my full power. You will die. And with the power of your soul, I will return to Solstheim and be master of my own fate once again." Miraak will then initiate combat and may say "Kruziikrel! Relonikiv! Now!"

For the fourth and final time, when Miraak's health gets low enough, he will use his Become Ethereal and Whirlwind Sprint shouts to try to escape. Hermaeus Mora will appear and cause Miraak to hover over the center. Hermaeus Mora will say "Did you think you could escape me, Miraak? You can hide nothing from me here." and will stab him with a tentacle to kill him. Hermaeus Mora will then continue his speech: "No matter. I have found a new Dragonborn to serve me." Miraak, in his dying breath will then say "May he/she be rewarded for his/her service as I am!" Miraak will then disintegrate into a skeleton, and Hermaeus Mora will tell you "Miraak harbored fantasies of rebellion against me. Learn from his example. Serve me faithfully, and you will continue to be richly rewarded."

At the Summit of Apocrypha[edit]

While during the battle with Miraak you cannot engage him in conversation, he may say a number of things to you depending on several factors.

Miraak may also taunt his dragons by saying: "Join the Last Dragonborn in his/her destruction." or "So easily you betray me, after all these years." He may taunt Kruziikrel: "I thought you were stronger than this, Kruziikrel." He may also taunt Sahrotaar: "I always knew you were weak-minded, Sahrotaar." 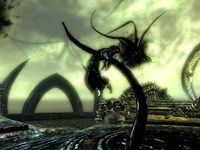 Once Mirrak's health during the final confrontation with the Dragonborn reaches a certain level he will attempt to escape the arena. Hermaeus Mora will intervene, claiming that Miraak can hide nothing from him in his realm. The Daedric Prince then impales Miraak with a tentacle, and explains to Miraak that his death is insignificant, as he has found a new Dragonborn to 'serve' him. As Miraak dies, he wishes upon you the same fate he is about to suffer, and then disintegrates into nothing but bones as his soul departs from his body and is absorbed by you.

Miraak: "Wuld Nah Kest!"
Hermaeus Mora: "Did you think you could escape me, Miraak? You can hide nothing from me here. No matter. I have found a new Dragonborn to serve me."
Miraak: "May he be rewarded for his service as I am!"
Hermaeus Mora: "Miraak harbored fantasies of rebellion against me. Learn from his example. Serve me faithfully, and you will continue to be richly rewarded." 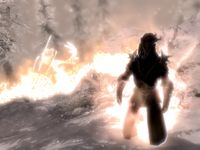 "Not this time, Dragonborn. This one's mine."

Once you complete the quest The Temple of Miraak, Miraak will begin stealing dragon souls from you, whether you are in Skyrim or on Solstheim. The first time you kill a dragon, he will always appear, and thereafter every time you kill a dragon with a soul that can be absorbed, there is a 25% chance that Miraak will appear. When this occurs, he will be in a semi-transparent and invulnerable state, and will absorb the soul of the slain dragon, preventing you from obtaining it. He will then disappear. This event will continue to happen until Miraak is defeated during the quest At the Summit of Apocrypha.

When Miraak steals a dragon soul, he may say one of the following lines: "Not this time, Dragonborn. This one's mine." or "It takes a strong will to command a Dragon's soul, perhaps you aren't as powerful as you think." or "Do you ever wonder if it hurts? To have one's soul ripped out like that?" or "This dragon's soul belongs to me." or "Thank you for your help. We will meet again soon." or "I grow ever stronger, Dragonborn." or "One step closer to my return."

The only exception is when you kill the dragon at Saering's Watch during The Fate of the Skaal. If you do not have any stored souls, and you haven't yet unlocked the first word of Bend Will, Miraak will not appear. 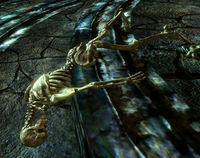 Note that Miraak's shouts are customized and most have much shorter recovery times than the regular versions.