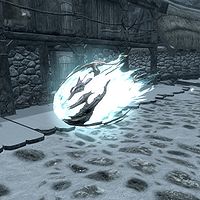 Magic Anomalies are strange, aggressive wisp-like entities created as a result of Ancano's activities in the College of Winterhold quest Containment. Floating at about head level and typically swarming in groups, they attack with a magical power at close range, dealing quite heavy frost and melee damage as well as exploding when killed; these explosions can potentially kill followers, as although most enemies will stop targeting followers when they're on the brink of death, these explosions are one of the many ways followers can indirectly be hit by a killing blow. When killed, Magic Anomalies drop leveled soul gems. They also have a tendency to ignore the landscape and can become stuck or die on elevated areas.