An elder dragon using the Fire Breath attack on Odahviing 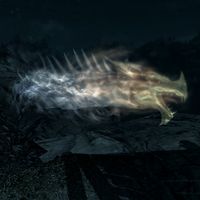 Fire Breath is a shout that deals fire damage to enemies, and potentially staggers them as well. Its use does not increase XP for the Destruction skill.

Meditating on the word Yol with Paarthurnax grants the player The Fire Within, an ability which increases the damage from this shout by 25%.

The Fire Wyrm itself is similar in appearance and behavior to an Ice Wraith. It is resistant to fire and uses a "Fire Bite" attack. When killed or when its timer expires, it explodes, dealing some damage. Unlike other summons, the Fire Wyrm will not follow the player. It is best to kill weaker enemies at the start of a fight with the Fire Breath shout, so the Fire Wyrms can help against stronger enemies of a group.