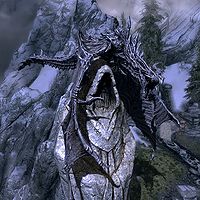 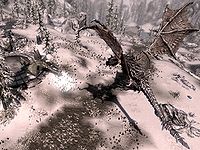 The dragon Viinturuth with Alduin, right after being resurrected

Alduin, or the World-Eater, as he is known to the residents of Skyrim, is an immensely powerful Dragon, and the main antagonist of the Main Quest. He is depicted as a malevolent force who destroys the world periodically, and the Nords believe that his reappearance heralds the end of time. He is the self-proclaimed First-Born of Akatosh and aspect of Akatosh. His name can be separated into "Al Du In", which means "Destroyer Devour Master" in Dragon Language.

He has a 50% resistance to fire and a 25% weakness to frost, and knows the Fire Breath, Frost Breath and Unrelenting Force shouts, as well as the Dragon Storm Call shout unique to him.

During the quest A Blade in the Dark, Alduin resurrects the dead dragon Sahloknir from his burial place, revealing how the rest of the dragons have returned after being slain centuries ago. After this quest, you may get to see the rare occasion where Alduin resurrects another, leveled dragon.

When resurrecting other dragons, Alduin can be spotted from a distance, and more easily heard thanks to his roars. It's easy to distinguish Alduin from other dragons, as he will stay far in the distance, flying around, unlike normal wild dragons (who will fly right to you). Alduin won't leave this location until you approach [verification needed], and as soon as you get close enough, he will say "(dragon name) zil gro dovah ulse!" then use the shout "Slen Tiid Vo!". A new dragon will appear (having been resurrected) and respond to Alduin, after which Alduin flies away and the resurrected dragon attacks you. It is possible to interrupt the resurrection by attacking Alduin, which causes him to become hostile and fly away [verification needed].

This Skyrim-related article is a stub. You can help by expanding it.
Retrieved from "https://en.uesp.net/w/index.php?title=Skyrim:Alduin&oldid=2691896"
Categories:
Hidden categories: