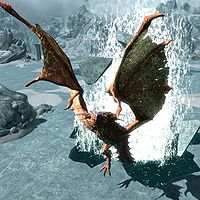 Voslaarum is a named dragon in Forgotten Vale. It guards a word wall for Drain Vitality, along with Naaslaarum.

Like all living dragons, Naaslaarum and Voslaarum will not spawn until after Dragon Rising is completed, to prevent early access to shouts.

If it is completed, they will be lurking in the water of the frozen lake near the Portal of Resolution, right under the ice, where you can only see them by diving. When you approach them, wittingly or not, they will both burst out through the ice and attack you.

This Skyrim-related article is a stub. You can help by expanding it.
Retrieved from "https://en.uesp.net/w/index.php?title=Skyrim:Voslaarum&oldid=2145799"
Categories:
Hidden categories: