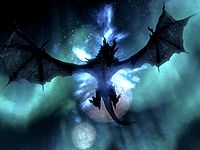 A dragon under the effects of Dragonrend is forced to land.

Dragonrend is a dragon shout that weakens a dragon and forces it to land. It is said to do so by forcing a dragon to experience mortality, a completely foreign concept to the ageless and immortal dragons. For this very reason, it is impossible for any dragon to learn Dragonrend.

The shout is learned during Alduin's Bane, as part of the main quest, by hearing the three Nordic heroes, Gormlaith Golden-Hilt, Felldir the Old, and Hakon One-Eye, use it against Alduin.