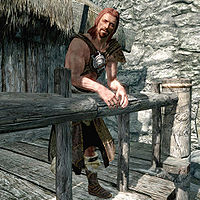 Torolf is a Nord lumberjack who appears at the beginning of the game. He is the son of Froki Whetted-Blade and the father of Haming. He is first seen talking to his son about the prisoners and the soldiers that are coming into town, telling him to go inside:

Haming: "Who are they, daddy? Where are they going?"
Torolf: "You need to go inside, little cub."
Haming: "Why? I want to watch the soldiers."
Torolf: "Inside the house. Now."
Haming: "Yes, papa."

He is killed during the dragon attack on Helgen.

He wears a set of hide armor with a matching pair of boots, and carries an iron dagger.

This Skyrim-related article is a stub. You can help by expanding it.
Retrieved from "https://en.uesp.net/w/index.php?title=Skyrim:Torolf&oldid=1488857"
Categories:
Hidden categories: