The UESPWiki – Your source for The Elder Scrolls since 1995
< Skyrim: Services
Jump to: navigation, search 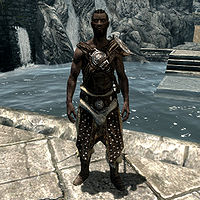 Trainers can provide lessons that increase your skill level in their area of expertise in exchange for gold. You may train up to five times per level. Trainers cannot raise skills past 90 -- you must earn the last ten points by using the skill, reading skill books, or obtaining quest rewards.

Unfortunately, you cannot save these "trainer points". If you didn't use a trainer in previous levels, you missed those opportunities. After leveling up, you'll get five new "training points", but "training points" from previous level will be gone if not used. This is problematic at lower levels or for new players, who lack the gold to train or can't access the locations of the trainers they desire. Thus, before leveling up, you should consider training with a trainer to use up the remaining "training points" for the current level. Alternatively, remind yourself to train right after leveling up.