The UESPWiki – Your source for The Elder Scrolls since 1995
< Skyrim: Places: Libraries
Jump to: navigation, search 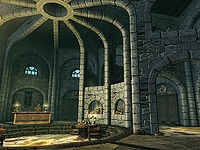 The Arcanaeum is the library located within the College of Winterhold, zealously maintained by Urag gro-Shub.

Collated over hundreds of years, the College's library contains a wealth of information, placed at the fingertips of those who require it - albeit under the ever-watchful eye of Urag gro-Shub. It is located on the first floor of the main college building, between the Hall of the Elements and the Arch-Mage's Quarters. If you choose to join the College, you may find yourself adding significantly to the collection of books available, and may even be gifted with some as rewards.

There are four entrances to the Arcanaeum: one from the antechamber in the Hall of Elements, one from the Arch-mage's Quarters, and two from the roof of the College. It is a large circular room with large locked and unlocked non-respawning bookcases lining most of the walls. By the entrances are five unlocked bookcases; however, everything in the Arcanaeum is owned, and taking items is considered stealing. There is a mammoth tusk on top of one of the unlocked bookcases, with a round wooden table and chairs nearby. There are many tables and chairs arranged in small groups around the room, with stacks of common and less common books on every available surface. There are many bottles of alto wine and wine as well as goblets on the tables, but strictly no food.

The counter is at the far end, where Urag gro-Shub can always be found, overseeing anyone within the Arcanaeum. He is very protective of the books found in the Arcanaeum, and will repeat warnings to take care of any books found here every time you talk to him. With the Arcane Archer Pack Creation installed, Spell Tome: Telekinesis Arrows and Telekinesis Arrows Research Notes can be found atop the counter next to Urag. Under the counter are two bottles of Nord mead, and behind it against the rear wall is a locked display case containing four rare books; however, the lock cannot be picked, and no key exists in-game to unlock either the various locked bookcases or the display case.

Farther around to the left is the non-respawning investigator's chest, which is master-locked. The key to open it is found on a table in the Midden along with a copy of the Midden Incident Report regarding the disappearance and subsequent deaths of four previous students. Inside the chest are four rings that are needed for the gauntlet in the Midden, as part of the unmarked quest Forgotten Names.

There are partition walls segregating the outer ring of the room from the central reading area. You will often find one or more of the college trainers in the Arcanaeum reading. Urag gro-Shub, like other Orcs, is able to make you Blood-Kin to the Orcs, once you have completed a couple quests for him.