This article is about the Companions faction. For companions for the player, see Followers.

The Companions are a group of warriors who take on private and public contracts for the people of Skyrim, and who purportedly carry on the tradition of the Five Hundred Companions of Ysgramor. Although the two groups offer a similar service, the Fighters Guild historically had a strong presence in Skyrim until the Companions seemingly replaced it entirely in the Fourth Era. They are based in the city of Whiterun, within the mead hall Jorrvaskr. The most elite members are included in the Circle of Jorrvaskr, and the chief councilor and arbitrator is known as the Harbinger, after Ysgramor, the "harbinger of us all" and the only real recognized leader of the Companions. Each new Harbinger is chosen by the last.

To learn more of the Companions and their history, see the lore article.

The Companions' sanctuary is the Nordic longhouse just below Dragonsreach, in the Winds District of Whiterun. This is an ancient and honored mead hall where generations of the Companions have met. According to local legend, Jorrvaskr is actually the oldest building in Whiterun. It existed alone on the mountain while the city was built up around it over the centuries. It features a main dining area, below which are the living quarters for the whelps and for the Circle and Harbinger.

Outside, there is a training area, and close by is the Skyforge, where the Companions' weapons are formed. The forge itself is large, ancient, and built outside on a mountain, close to the sky. Below the Skyforge is a ceremonial area known as The Underforge, which is out of bounds except on rare occasions. 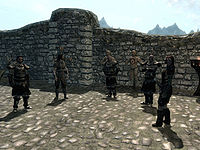 Members of The Circle at the initiation ceremony

Once the Companions quest line has been finished, you are named Harbinger. This allows you to command most of the Companions to aid you in battle and to forge Ancient Nord Armor and Nord Hero weaponry at the Skyforge.

The primary Companions quest line consists of six quests; multiple radiant quests must also be completed over the course of the quest line. Three achievements (50 points; 2 Bronze and 1 Silver) are unlocked by the Companions quests.

These quests are available after completing Take Up Arms and are repeatable:

These quests are available after completing The Silver Hand and are repeatable:

These quests are available after completing Glory of the Dead and are repeatable: