The Trial of the Whelp[edit]

After successfully completing Take Up Arms and any one of the radiant quests, speaking to most any Companion member will point you towards Skjor for your next major assignment. Skjor will reveal that a scholar has discovered another fragment of the legendary battleaxe, Wuuthrad. He asks you to retrieve it and will direct you to Farkas who will serve as your Shield-Brother for the task, both helping you survive the quest and supervising you to ensure you complete the mission "honorably". When approached, Farkas becomes a temporary follower. If you already have a follower, they will return to your home or to their base location and await you there until you've completed the quest. If asked, Farkas will elaborate on the origins of Wuuthrad. Your destination is Dustman's Cairn, a barrow northwest of Whiterun. You can either have him follow you all the way or ask him to meet you there.

The place is crawling with draugr, so be prepared for a long trek. There is a Two-handed skill book The Battle of Sancre Tor in the first room. The second chamber contains an arcane enchanter and two thrones, with the only available path blocked by a gate. Locate the northernmost room and pull the lever, which will drop another gate and trap you inside, after which the lever will break. From the other side, Farkas says he will find a way to release you, then is unexpectedly confronted by a group of Silver Hand members, leaving you trapped to watch the scene unfold. 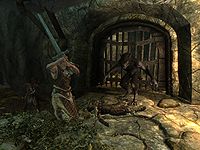 The Silver Hand turns out to be there for a reason. While you watch, Farkas will transform into a werewolf and wipe out the opposition within seconds. After opening the gate, Farkas will reveal that only certain Companion members are blessed with the ability. Proceed forward through the linear cave system until you reach the entrance to the second zone, Dustman's Crypt. 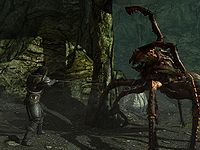 After continuing through the next door, you will cross the bridge where you can see the lower room you are headed towards. If you stand idle in this caged walkway, at least one archer will attack you from the room below. After crossing the bridge, you will go around a corner and be in a long down-sloped hallway. If you run ahead to attack the Silver Hand, or choose to follow Farkas, a few draugr will awaken from the crypts lining the walls and attack you from behind. Make your way through the crypt and fight all Silver Hand members and draugr. In the large chamber under the bridge, open the chest for the Dustman's Cairn Key and unlock the door to the north. A few skeevers will attack in the next tunnel. When you reach an alchemy lab, head east and fight the residing frostbite spiders, then head downstream using the small bridges and face the draugr. Follow the linear path through the catacombs and open the iron door.

A Fragment and a Shout[edit] 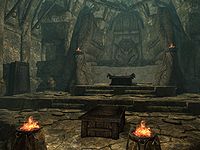 The chamber ahead appears quiet at first, but the many sealed alcoves and coffins should hint at what to expect. Loot the many minor containers for treasure, then follow the map marker to the altar where the Fragment of Wuuthrad rests. Approach the word wall behind the altar to learn one of the words for the Fire Breath dragon shout. Finally, pick up the fragment and prepare as numerous draugr burst out of the coffins to attack you and Farkas. Additionally, the iron door will now be locked, preventing any strategic backtracking. After the battle, a path will open from the balcony above, so make your way to a tunnel initially inaccessible in the first zone, which will land you back near the entrance to Skyrim.

Back in Whiterun, you will find Vilkas waiting for you just outside Jorrvaskr. He will then lead you around the building where the entire group of Companions will be gathered. Guild head Kodlak Whitemane will give a short speech and welcome you to the Companions, while Farkas will swear eternal loyalty to you. You are now an official member of the Companions, but will have to complete yet another radiant quest before your next major assignment. You will also be able to buy Skyforge Steel weapons from Eorlund Gray-Mane from now on, and he will give you one Skyforge Steel weapon of your choice for free.

This is ironic, since Farkas is the only male member of the Circle who is not wearing the Wolf Armor of the Companions.

Notes
* Any text displayed in angle brackets (e.g., <Alias=LocationHold>) is dynamically set by the Radiant Quest system, and will be filled in with the appropriate word(s) when seen in game.
Retrieved from "https://en.uesp.net/w/index.php?title=Skyrim:Proving_Honor&oldid=2651439"
Categories:
Hidden categories: