After completing a radiant quest, most members will point you towards Skjor for your next assignment; apparently he has something 'special' planned for you. Skjor turns out to be less talkative than usual and will request a meeting after dark near the Underforge, a secret crypt underneath the smithy of Eorlund Gray-Mane. At night, Skjor will wait for you near the secret entrance, determined to make you a stronger member of the Companions. He will then open the secret entrance and encourage you to follow.

Inside the Underforge, you will encounter Aela the Huntress in her lycanthropic form, standing next to an empty fountain. Skjor will introduce her as your 'forebear', and will inform you that this is to be kept secret from Harbinger Kodlak Whitemane, and will then ask if you are prepared. When you are ready, Skjor will cut open Aela's wrist, filling the fountain with her blood. Activate the fountain and receive the Beast Form power, which causes you to black out.

You wake up outside the Underforge, now as a werewolf, where you will find all of Whiterun's residents are now hostile to you. If you head into the streets, citizens will flee and guards will attack you, leaving you no choice but to avoid them or kill them. Due to your beastly appearance, you will not gain a bounty for assaulting anyone. After a certain amount of time, you will black out once again.

The easiest way to avoid unwanted casualties is to simply wait a while after exiting the Underforge, as this causes your werewolf bloodlust to wear off, and the next scene to continue.

Another option is to go back into the Underforge as soon as you've transformed, and use the secret exit that leads you out of the city.

You can also simply avoid any attackers if you do not wish to kill any people in the city, you'll black out regardless of whether you killed anyone or not.

This time, you wake up in the middle of nowhere, with a concerned Aela looking over you. Your gear has been unequipped, but you haven't lost anything; simply re-equip to prepare for battle. Aela will congratulate you on surviving the initiation and inform you that the Silver Hand, a group of werewolf hunters, have inhabited Gallows Rock and will not hide the fact that they should be slaughtered right away. She also informs you that Skjor already entered the fort. From this point, Aela will act as your follower, dismissing your current follower if you have one. Head west towards the fort. A number of Silver Hand members will guard the exterior area, so dispose of them and enter the fort. 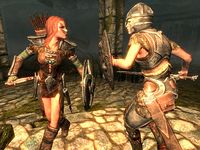 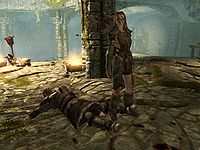 "The bastards... somehow they managed to kill Skjor."

The first room is a sealed-off area, so pull the chain next to the severed werewolf head and proceed forward. The fort is buzzing with enemies and werewolves in cages, both living and dead, all seemingly exposed to torture by their captors. Be on the lookout for the One-handed skill book The Importance of Where in the huge southern chamber, the Smithing skill book The Last Scabbard of Akrash near the workbench, as well as several locked and unlocked chests. Aela will comment on the first dead werewolf you find, which is found next to a set of rare Torture Tools.

When you reach the northwestern chamber, Aela will rightfully warn you about Silver Hand leader Krev the Skinner, so be prepared. When the chamber is cleared, a worried Aela will run up onto the podium and discover the dead body of Skjor, obviously killed due to his lycanthropy. Once you speak with her, the quest will end and you will have to find your own way out, through the door to the northeast that was previously barred. Three new radiant quests are now available back in Jorrvaskr and you will have to complete two of them (for Aela) before you can access the next major quest. However, if a certain amount of time has passed, you may only have to do one radiant quest to begin Blood's Honor.[verification needed — see talk page]

One achievement is unlocked once you speak with Aela after surviving the initiation:

Notes
* Any text displayed in angle brackets (e.g., <Alias=LocationHold>) is dynamically set by the Radiant Quest system, and will be filled in with the appropriate word(s) when seen in game.
Retrieved from "https://en.uesp.net/w/index.php?title=Skyrim:The_Silver_Hand&oldid=2651016"
Categories:
Hidden categories: