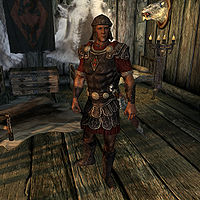 The Penitus Oculatus is an Imperial organization serving as a personal security and espionage force for the Emperor. It gained great duties and prestige following the official dissolution of the Blades. Its agents perform infiltrations and counter-espionage against enemies of the Empire, and have been known to carry out assassinations as necessary for the Empire's security. As their primary concerns in protecting the Emperor lie in Cyrodiil, their only presence in Skyrim is a small outpost in Dragon Bridge.

For more information about the Penitus Oculatus, see the lore article.