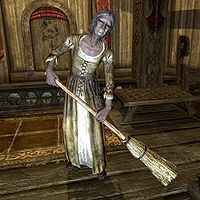 Tilma the Haggard in the living quarters of Jorrvaskr

Tilma the Haggard is an elderly citizen and the maid of Jorrvaskr, cleaning up for the Companions.

Dedicated to her duties, Tilma never leaves Jorrvaskr and will be found on the ground floor or in the quarters downstairs, doing a number of random activities around the clock, including sweeping, eating, sleeping, wandering, or just relaxing in a chair. The only exception to this routine occurs at the beginning of the quest Glory of the Dead, when Tilma will attend the funeral of Kodlak Whitemane.

She wields a Skyforge Steel dagger and wears a set of lower-class clothing, a belted tunic with a pair of boots.

Before you join the Companions, entering Jorrvaskr for the first time will net you the sight of newcomers Athis and Njada Stonearm engaged in a friendly brawl while the other Companions stand around and cheer. Tilma will not participate, and will instead stay in the background, mumbling: "I just try to keep out of the way when they start roughhousing." When you greet her, she will say: "Oh, I'm just a servant, dear. You want to talk to one of the Companions, I'm sure." At this point, and until you have completed the initiation quest Take Up Arms, you can ask her about the Companions, which will make her elaborate: "A good bunch of men and women, who make too much a mess, if you ask me." She will bid you farewell with either "Goodbye, dear." or "Is it cold in here? I should put more wood on the fire..."

At all other times, she will be nice and welcoming, saying: "I've been tending to the warriors of Jorrvaskr for as long as I can remember." and "I see everything, hear everything and know everything." She will also hint at things to come with: "Oh, I'm a good keeper of secrets. Have to be, in this hall." She is only available for conversation at one other point, namely when Skjor loses his life at the end of The Silver Hand. When you bring her the news, she will be quite sad and comment: "Oh my. He was always so kind to me. A bit rough around the edges, but a good man. I... I'll get his things in order."