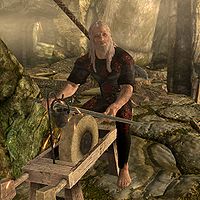 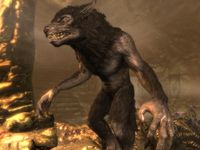 Arnbjorn is a werewolf assassin, former Companion, and a member of the Dark Brotherhood. He is also Astrid's husband.

He wears a special set of Shrouded Armor, which is cut at the elbow, instead of the usual wrist cut, and fights with an Iron Battleaxe of Chills.

Arnbjorn lives a very relaxed life in the Sanctuary, getting up at 8am. He then spends the rest of the day usually sharpening weapons or talking to the other family members. Then, at midnight, he'll head to his bed to finally get some sleep.

When you greet him, he'll reveal his marital status first, saying, "Let me guess - Astrid failed to mention I'm her husband? She has a tendency to do that. Doesn't want the others thinking she plays favorites." He also uses a lot of food-related nicknames, "What do you want, beef roast?", "You're part of a family now, hamshank. I trust you... you trust me. Got it?", and "Hello, tidbit." He'll also explain these by saying how he thinks of you as food "Don't take offense to the nicknames, morsel. I'm a werewolf. Hard not to think of you as a snack." If he catches you sneaking by him, he'll say, "You're putting your hand... in my pocket? Have you gone complete cracked?" If you ask him to tell something about himself, he will give you a small summary of information. "Look. If you're trying to get to know me - don't. I don't like you, and I never will. It's nothing personal. But... My wife trusts you, and I trust her judgment. So you can't be all bad. Here's all you need to know: I'm a werewolf. I like killing things. I love Astrid. I hate annoying people. And the color blue gives me a headache." This response, however, changes drastically if you are a member of The Companions; "I might ask the same of you. For you are more than mortal. You are moon-born. You are wolf. So you're a Companion, then? I can't imagine you got your gift anywhere else. I hope you have better luck with them than I did. Oh yes, I was once brother to the Companions. Let's just say they found my methods "unsettling." The Dark Brotherhood, obviously, feels differently." If you ask him what he thinks about Cicero and the Night Mother, he will boldly state, "The witless fool and his pet corpse? Take a guess." When exiting conversation, Arnbjorn will use more nicknames, saying either "Take care of yourself, beef roast.", "Later, ham hock.", or a more out-of-character "Yeah, good luck."

When you first enter the Sanctuary, Arnbjorn will be taking part in the following conversation:

From the very first moment you speak to him it's clear that he is not impressed by you. "Well, well. It's raw meat. Oh, my beautiful wife has told me all about you." Regardless of how you react, he will follow up with "I'll give you a week before you end up dead in a ditch." 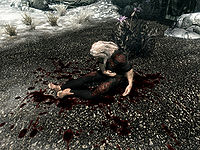 When you return to the Sanctuary, you'll find Veezara wounded on the ground. Neither Cicero or Arnbjorn are anywhere to be found. Speaking to Astrid will fill you in on the details, "I want you to find that miserable little fool and end his life! But first... find my husband. Make sure he's all right. After the attack, Arnbjorn flew into a rage. When Cicero left... Arnbjorn went after him. They disappeared into the wild." Once you find evidence pointing to the location that they were headed, Astrid once again urges you to make sure Arnbjorn is in good health, "Every moment counts, so I want you to take my horse. His name is Shadowmere. You'll find him outside, by the pool. Let's just say he's... one of us. Find Arnbjorn. Make sure my husband's all right."

While Astrid is clearly worried, Nazir seems to have more confidence in Arnbjorn, stating "Going after Cicero now would be a fool's errand. That little jester is currently being digested in Arnbjorn's stomach, mark my words."

Once you arrive at the Dawnstar Sanctuary, you will immediately spot Arnbjorn sitting on the ground, clearly in pain. When he notices you, he will say "Should have figured Astrid would send you." Telling him that he is hurt will result in him sarcastically saying "What gave it away? Ha ha ha ha ha. Yeah, got to admit that little jester is good with that butter knife. But don't worry, I gave as good as I got." You can then ask him where Cicero went and he will say "In there! Through the door. Some old Sanctuary, by the looks of it. I would have followed him, but I don't know the phrase." From here on you would tell him that you know the phrase and that he should get back to the Sanctuary "All right, you convinced me. Doubt I'd be much good to you, anyway. The little fop cut me pretty deep. But I slashed him good. Pretty sure I severed an artery. Don't know what you're going to find in there... but you can probably just follow the blood." He will end the conversation with a request "Do me a favor and kill that little jester twice. Just to make sure." After this he leaves with the words "Good hunting. I'll see you back at the Sanctuary." If you exited the conversation at any point, he will say "Gee, thanks for the help."

When you return to the Sanctuary after finishing business with Cicero, Arnbjorn will be happy to see you and say, "There you are. Look, I... I just wanted to say thanks for coming to find me. Back in Dawnstar. Crazy jester finally met his match, am I right?"

When you finish To Kill an Empire, and return to Sanctuary, you will find Arnbjorn in Werewolf form fending off members of the Penitus Oculatus, while doing so, he will meet his demise.