After dealing with Cicero, Astrid is anxious to get back on task. She mentions something about a famous, elusive chef and a crazy scheme to impersonate him while cooking for the Emperor. She then points you to Festus Krex, who will be directing this phase of the Emperor's assassination. Festus explains that your new objective is to kill the Gourmet and while assuming his identity, poison the meal being prepared for the Emperor. What complicates this matter is that the Gourmet's identity is known by only a select few. Luckily, Festus has obtained an autographed copy of the Gourmet's book Uncommon Taste owned by Anton Virane. This suggests that Virane may know the true identity of the Gourmet.

Your first task is to track down Anton Virane, obtain the Gourmet's name, and kill Virane to prevent his interference in the operation. He works at Markarth in the Understone Keep kitchen. He is at first not willing to give you any information, but after some special persuasion, he will quickly reveal the name of the Gourmet: an Orc named Balagog gro-Nolob. After he reveals the name it is advisable to tell Virane that he will not be harmed or to remain silent, else he will start running around in a panic. Wait for an opportunity to present itself and kill him, preferably without any pesky witnesses present who could cause you to incur a bounty. Conversely, instead of having him remain in the crowded kitchen it may be better to scare him and have him run out to a more private place where you can kill him with no witnesses. When this is finished, it's on to the main course…

Just a Dash of Blood[edit] 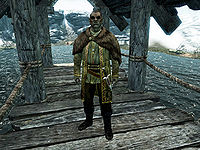 The Gourmet, Balagog gro-Nolob, can be found at the Nightgate Inn, either inside or outside, depending on the time of day: during the afternoon, he stands at the dock right outside the inn and gazes out over the pond, making it very easy to sneak attack him for a quick kill. After he is dead take the writ of passage from him, and simply drag his body into the pond (see Notes below) to fulfill the bonus objective. Another way to dispose of the body is to use the Unrelenting Force shout to send it into the water. At night, Balagog gro-Nolob can be found in the Nightgate Inn Cellar, which can be entered either from inside the inn or via a small hatch near the north exterior wall. Balagog will be asleep much of the time, but as there are no witnesses, the kill will be easy whether he is awake or not. When presented with an opportunity, kill him and take the Writ of Passage from his corpse. Make sure not to kill him in the chair that he sits in because his body may get trapped in the chair, rendering him unable to be dragged to a hiding spot. To successfully hide the body in the cellar, drag him behind the haystack or drop him into the large barrel at the end of the cellar next to the ladder. If you kill him while he cowers behind the wine barrels, this will automatically count as hiding the body. You may also have a small conversation with him:

No More Soup for You[edit]

With the Writ of Passage in hand, return to the sanctuary for your reward. Astrid greets you with special news: All of the pieces are in place, and the time is at hand. She instructs you to head to Castle Dour in Solitude to fulfill your duties as Listener.