This Soup Is To Die For[edit] 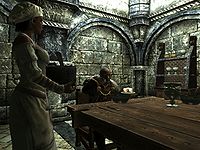 After securing the writ of passage into the Emperor's service, the rest of the plan is ready to fall into place. Following Astrid's instructions, travel to Solitude with the poisonous herb she gave you and report to head of security, Commander Maro. Show him the writ you stole from the Gourmet to gain entrance to the castle. Maro will allow you to pass with no trouble (commenting on your clothing depending on whether or not you are wearing the chef's hat or clothes), telling you to report to the castle's chef, Gianna. When Gianna greets you, she is both nervous and excited at the prospect of working with the great Gourmet. If you have yet to don your chef's hat, she will direct you to one on the shelf; you cannot begin "cooking" until you are appropriately attired. Once you are ready, say, Enough! The Gourmet is here to cook, not talk! Let us begin.

Gianna flusters, "Oh! Yes, but of course. Ahem. The Emperor has requested your signature dish - the Potage le Magnifique. I've taken the liberty of getting it started. But the cookbook only says so much, and everyone makes the Potage differently. I would be honored if we could make it... the Gourmet's special way. The base broth is already boiled. We can get started right now. So... which ingredient should I add next?"

The Potage le Magnifique, as described in Uncommon Taste, consists of a basic recipe and more ingredients added based on the chef's inspiration. Thus, you now have four ingredients to select, at each stage there are three options: the normal, the strange, and her choice.

When you are finished don't forget to add your "special" final ingredient: "Oh? What is this, some kind of herb? Are you sure? The Potage tastes perfect as it is. Any other ingredient might..."

"Heh, I'm sorry. Of course. It's your most famous recipe, after all. All right then, your secret ingredient's been added. And if I may say so... it has been an honor, getting a chance to prepare a meal with, well... the best chef in the entire Empire. I'll carry the stew pot, and lead the way up to the dining room. I'm sure the Emperor and his guests are dying to meet you."

It is not necessary to poison the Emperor with the Jarrin Root, however, in order to successfully complete the quest—you may kill him any way you want.

When the Potage is complete, follow Gianna into the dining room as she serves the food to the Emperor. Right before you go in, there is a copy of the Enchanting skill book Catalogue of Weapon Enchantments on the table to your left. The Emperor will be speaking to the diners and a noblewoman about his cousin's murder when you enter, while two Penitus Oculatus agents stand guard behind him. Gianna will serve the Emperor the meal you cooked and, regardless of the ingredients, he will compliment its amazing taste.

If you added the Jarrin Root, the Emperor will soon die a rather unspectacular death. If you didn't add the poison, the Emperor and his guests will continue to slurp their soup until you assassinate him, which is easy enough since he has only 1 health point. The guards will attack you upon the Emperor's death, and Gianna will attempt to defend you before fleeing, although this may be avoided by successfully sneaking as he dies.

Once the Emperor is dead, exit through the door opposite where you entered upstairs.

Once out the door it looks like you are home free. However, as you cross the bridge, you will be ambushed by Commander Maro and several of his agents. He reveals that the man you killed was a decoy. Maro explains that someone from the Dark Brotherhood betrayed you and revealed to Maro your plans to assassinate the Emperor. Maro agreed to allow the Brotherhood to continue its business in exchange for you. He then tells you that because the Dark Brotherhood killed his son he intends to go back on his word and wipe them out. He has sent his agents to attack the sanctuary already. As soon as the conversation with Maro begins, your bounty in Haafingar will be set to 1500, so the city guards will be on the lookout for you. Escape the city by following the tower's stairs to the very bottom and head to the Brotherhood Sanctuary. You cannot fast travel directly to the sanctuary, so the quickest option is to fast travel to Falkreath and head west. The quest ends when you reach the Sanctuary.