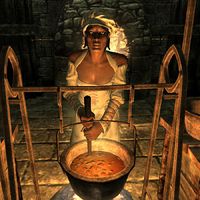 Gianna is an Imperial cook in the Castle Dour Emperor's Tower. She is the castle's cook, and is assigned to assist the Gourmet when the Emperor visits Skyrim. She is eager to take the unique opportunity to not only work with the Gourmet, but to serve the Emperor as well. After the quest, she disappears from the game.

Gianna wears a chef's tunic along with a chef's hat and a pair of shoes and defends herself with an iron dagger. She also carries a belted tunic.

When you present yourself as the Gourmet, Gianna has unique responses depending on your race.

When you are wearing a chef's hat, it is time to begin. Enough! The Gourmet is here to cook, not talk! Let us begin.

Oh! Yes, but of course. Ahem. The Emperor has requested your signature dish - the Potage le Magnifique. I've taken the liberty of getting it started. But the cookbook only says so much, and everyone makes the Potage differently. I would be honored if we could make it... the Gourmet's special way. The base broth is already boiled. We can get started right now. So... which ingredient should I add next?

You now have four ingredients to select, at each stage there are three options, the normal, the strange and her choice.

When you are finished you can choose to add one final ingredient: "Oh? What is this, some kind of herb? Are you sure? The Potage tastes perfect as it is. Any other ingredient might..."

Now, now, Gianna. Who's the Gourmet here?: "Heh, I'm sorry. Of course. It's your most famous recipe, after all. All right then, your secret ingredient's been added. And if I may say so... it has been an honor, getting a chance to prepare a meal with, well... the best chef in the entire Empire. I'll carry the stew pot, and lead the way up to the dining room. I'm sure the Emperor and his guests are dying to meet you."

This Skyrim-related article is a stub. You can help by expanding it.
Retrieved from "https://en.uesp.net/w/index.php?title=Skyrim:Gianna&oldid=2188524"
Categories:
Hidden categories: