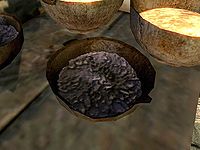 A bowl of vampire dust

Vampire Dust is an alchemical ingredient dropped by vampires.

In terms of combinations of two ingredients, Vampire Dust can be combined with 61 other ingredients.

30 guaranteed samples can be found in 22 different locations. Locations with multiple samples are: