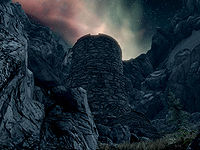 Autumnwatch Tower is a dragon lair comprising a pair of abandoned towers south of Ivarstead. Its word wall teaches part of the Marked for Death dragon shout.

Inside the northern tower, the bottom floor contains another tanning rack by the entrance, with a set of shelves to the right and a cooking pot in the middle of the floor. The shelves hold two deer hides, two leather strips, and a blacksmith's elixir. Climbing the spiral stone stairs leads directly to the top floor, where three unowned bed rolls can be found. There is also an enchanted pair of hide boots and a hide helmet on a crate beside a straw bale. Finally, a copy of the Light Armor skill book Jornibret's Last Dance and a bottle of alto wine are on the small crate by a chair.

Inside the southern tower, the bottom floor contains two imp stool fungi, several food sacks and barrels, a loose piece of firewood, and a woodcutter's axe on a wooden block. The second floor holds a bed roll, a random rare book, two loose pieces of firewood, a medium coin purse, and a wooden bowl holding a chicken egg beside a bale of straw; on the other side of the bale is a food barrel with an apothecary's satchel on top. The top floor contains a skeleton that can be looted for a copy of Physicalities of Werewolves beside a crate with a bottle of Nord mead on top and the unlocked boss chest. In an open crate beside the skeleton are two bowls of vampire dust, and in another open crate on the other side of the chest are two samples of slaughterfish scales. There is a stone bridge crossing the gap to the word wall.

Before the dragons' return, the towers will be occupied by a group of bandits. There are two bandits at the bottom of the northern tower, a bandit outside the southern tower, and a bandit chief at the top.

After the dragons' return, the word wall will be guarded by a leveled dragon. The dragon will likely detect you before you ascend the towers, and can sometimes detect the undead of Arcwind Point and will fly off to deal with them.