Arcwind Point is a small outdoor Nordic ruin located at the southern edge of Skyrim, south of Ivarstead.

This entirely outdoors location is actually several separate ruins. It is guarded by skeletons, high level draugr, and once you have completed Dragon Rising, a dragon.

The ruins can be reached by a path south of the Rift Imperial Camp, or another path between Froki's Shack and Autumnwatch Tower. It can be awkward to find the beginning of the path for the former route. The easiest way to find it is to leave the Imperial camp via the southeastern exit. Ahead on your right is a corundum ore vein beside a canis root. If you turn and head due west, you'll join up with the early part of the path. The latter route also has a canis root near the beginning and a couple snowberry bushes along it as it zigzags up the mountainside. You may also alert the dragon roosting on Autumnwatch Tower unless you choose to deal with it beforehand. Just after the path turns west and widens, there is an altar with three random potions on it and two dead draugr on or in front of it. You can also reach this path by climbing the mountain immediately to the right of Froki's shack. At the top of the mountain climb is a shrine of Talos. From here, dropping down the mountain to the west brings you to where the second of the paths turns west and widens.

Continuing along the path heading west, you are likely to face two leveled creatures near a circular barrow, the type with a covered passage around a central circular chamber. On the right, just before the barrow is a quicksilver ore vein. The barrow is nearly filled with snow and ice, and to reach the center you need to enter via the right-hand path. In the middle chamber is an unlocked chest with a dead Nord beside it. Farther along the path heading west, it begins to descend. Ahead is a square stone arch with a sunken barrow beyond it. As you near the barrow, use of detect dead will reveal a draugr slumbering in an upright sarcophagus. Any noise fighting the draugr may alert several skeletons to your presence and cause them to converge on you. There are two paths continuing to head west from here; most of the ten skeletons are found along the southern of the two paths, as is a second quicksilver ore vein. You may also encounter the dragon at any point from here onward, as it is regularly disturbed by up to two leveled draugr found near the word wall, who it may be found fighting against. To the north is the other path that leads to the ruins. 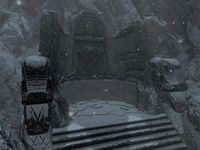 The word wall added by Dawnguard

The two paths merge again just before a huge structure made from interconnecting arches, with a raised platform in the center and stairs on each side leading up to it. On the platform is a sarcophagus containing a highly leveled draugr. If you have Dawnguard installed, a series of flights of stairs to the west lead up to a word wall, which teaches a part of the Drain Vitality shout. To the north are more flights of stairs rising up to another building. In front of the entrance, which is an open doorway, is a pressure plate that triggers a battering ram from the entrance. The building is narrow, with two large openings on the other side and a stone table between them holding two random potions of magicka, a random potion of resist cold, and a random poison.

Upon exiting out the other side, another highly leveled draugr will burst from an upright sarcophagus which is against the side of the building and between the openings. To the west is a grave with a nightshade plant beside it, and farther west is a third quicksilver ore vein on the ground. There are two more rows of graves opposite the building with several more nightshade plants. To the east, you can see a tower with stairs leading up to it. Take care, as two more draugr are patrolling in front of this tower, and at higher levels both may use the Unrelenting Force dragon shout, which may knock you off the mountainside and can kill you. Inside, the tower is empty except for the top two floors. There is an unlocked boss-level chest on the floor just below the top floor. The top floor features a skeleton that you can loot in front of a pedestal holding a copy of the Restoration skill book Withershins.