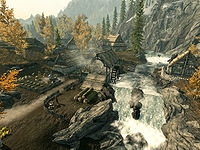 Ivarstead is a small milling town located at the base of the Throat of the World. The town is located on the shores of Lake Geir, with one of the forks of the Darkwater River powering the sawmill on its way to join the White River. The town consists of five buildings and has Shroud Hearth Barrow just to the east, overshadowing the town. Some of the town's residents believe the barrow to be haunted. The innkeeper, Wilhelm willingly tells you more about this. He runs Vilemyr Inn, which is at the southern end of the town opposite Klimmek's house, to the north is Fellstar Farm, opposite this is Temba Wide-Arm's sawmill, and across the river is Narfi's broken down house.

It is a town in decline, with fewer travelers visiting since the haunting of the barrow began. Some of the residents fear for the town's survival as many of the townspeople have either left for Riften or want to move away. Pilgrims and travelers often pass through the town on their way up the 7000 steps to High Hrothgar.