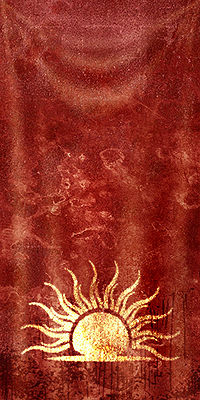 The Order of the Mythic Dawn[1][2] was a secret cult led by Mankar Camoran that worshipped the Daedric Prince of Destruction, Mehrunes Dagon.[3]

When exactly the Mythic Dawn cult came into existence is unknown, but their prominence can supposedly be traced back to the early days of Tiber Septim in the late Second Era.[4]

The cult carried out an assassination plot against Emperor Uriel Septim VII and his heirs in 3E 433. Their deaths brought about the Oblivion Crisis, which resulted in a Daedric invasion of Tamriel and the end of the Third Era.[3][5]

The Mythic Dawn was led by the "madman" Mankar Camoran, whose son Raven and daughter Ruma were his key lieutenants; all three were slain by the Champion of Cyrodiil.[5][6] The Mythic Dawn had many sleeper agents posing as regular townsfolk scattered throughout Tamriel, as well as a shrine to Mehrunes Dagon hidden in a cavern near Lake Arrius that served as their base.[5]

In the time following the Oblivion Crisis' conclusion, numerable groups would form, pledging to eradicate the Mythic Dawn remnants from Tamriel.[7]

One such militia group, seemingly operating in Skyrim, had somehow come to discover and acquire a Daedric Artifact of Mehrunes Dagon, the Mehrunes' Razor. It was then that the militia was renamed to the Keepers of the Razor. It was decided that the dagger would be disassembled into three pieces, and be kept under guard by the Keepers' three highest members of the order's inner circle. This burden would be passed down through the generations, from descendant to descendant.[7]

Circa 4E 201, in times contemporary to the Stormcloak Rebellion, a museum dedicated to Mythic Dawn cult had been opened in the Skyrim city of Dawnstar by Silus Vesuius, whose own ancestors had been Mythic Dawn cultists.[8] Silus commissioned the Last Dragonborn to recover the pieces from the Keepers' descendants. And the Mehrunes' Razor was rejoined.[8]

From 4E 200-201, a new order of Mythic Dawn cultists surged from within the deeps of the Velothi Mountains, at a place called Red Scar Cavern, where members of the fallen order used to gather. The High Priest, Vonos, was the first to find this place, having been drawn to a buried Oblivion Gate via premonition and dreams supposedly sent him by Daedra Prince Mehrunes Dagon. For months Vonos dug deeper and deeper, stone by stone. Others began to heed Dagon's call, and found their way to Red Scar. Eventually, they uncovered an ancient Mythic Dawn temple, with the envisioned Oblivion Gate disappointingly lying destroyed like all others, though Vonos understood the Liminal Barriers were weakened in this place. The renewed Mythic Dawn here made it their mission to locate the scattered pieces of the Gates across the land and reopen the Jaws of Oblivion, and they succeeded...[9][10]

High Priest Vonos continued to be haunted with dreams, these however, were about Akatosh and his Dragonborn, about the return of the World-Eater, Alduin, and the rise of the Last Dragonborn -- both identifiable to Vonos as fragments of Akatosh's very soul. Vonos designed a scheme that would make the Last Dragonborn an unwitting instrument of Dagon's will. Vonos set up the Last Dragonborn to obtain an artifact of untold power, a Great Welkynd Stone of the Ayleids, with this artifact in one hand, and a weapon in the other, the Last Dragonborn would strike down Vonos, unknowingly enabling a designed ritual which would which would serve as the ultimate betrayal of Akatosh, thereby corrupting the Stone and causing the Oblivion Gate to open. And from within the Deadlands, on the other side of the portal, the Dremora Valkynaz: Gatanas and Methats awaited to lead the incoming assault. Before they could do this thing however, the Last Dragonborn entered the gate and struck them down. Simultaneously the Vigil of Stendarr scoured the temple of cultists. However, the Gate's Sigil Stone had been destroyed by the Daedra to prevent Gate's closure, and the portal remained permanently open, potentially leaving Tamriel vulnerable to Daedric invasion.[9][10] 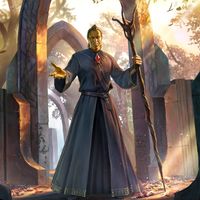 This Lore-related article is a stub. You can help by expanding it.
Retrieved from "https://en.uesp.net/w/index.php?title=Lore:Mythic_Dawn&oldid=2618302"
Categories:
Hidden categories: