A gate to the planes of Oblivion

The Oblivion Crisis, also known as the Great Anguish,[1] was a total war between the Daedra and the population of Tamriel. It began with the assassination of Uriel Septim VII and all of his known heirs[2] in 3E 433.[3] Shortly afterward, Oblivion Gates to the Deadlands opened across Tamriel and Daedra poured out as the result of a fanatical cult of worshippers of Mehrunes Dagon known as the Mythic Dawn.[4] Widespread devastation and casualties resulted across entire provinces. The Daedra besieged Skyrim, and laid waste to the Old Holds.[5] In Black Marsh, the Hist called back many Argonians to fight off the Daedra. According to An-Xileel the Daedra were forced to close their Oblivion gates in Black Marsh due to Argonian counter invasion.[6] In Cyrodiil, the city of Kvatch was entirely destroyed.[7]

Adril Arano, a Second Councilor of Raven Rock in the late Fourth Era, claimed that the Empire pulled most of its forces out of Morrowind during the Crisis.[8] However, this contradicts the words of High Chancellor Ocato himself during the Crisis, who stated that Cyrodiil and cities such as Bruma were virtually defenseless precisely because he was both unable and unwilling to pull any troops out of the other provinces.[9] Indeed, the Imperial Province was left almost entirely to its own devices, and no foreign legions were ever found within Cyrodiil for the entirety of the Crisis or its immediate aftermath.[10] Still, a history of the Raven Rock colony records that the bulk of the Imperial Guard stationed there was recalled to Cyrodiil from the then-Nordic Solstheim, though the author's source for this matter are the Redoran Dunmer of the settlement.[11]

The Empire was near collapse, but Uriel VII's illegitimate son, Martin Septim, ended the invasion with the help of a mysterious hero, but the cost was enormous. Martin, the last of the Septim bloodline, sacrificed himself and the Amulet of Kings to become an Avatar of Akatosh and cast Mehrunes Dagon back into Oblivion. This event marked the end of the Third Era.[12] 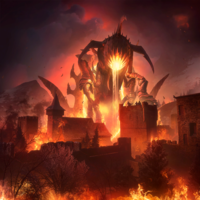 A Siege Crawler laying waste to a city