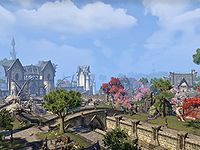 Firsthold (also spelled as First Hold)[1] is one of the eight major cities in the province of the Summerset Isles,[2] situated on the vernal groves and craggy cliffs of Auridon. Built on the highest point of the island, in the region of Vafe, Firsthold is one of the oldest cities built by the Elves in all of Tamriel, founded by High Lord Torinaan after he guided his people across the Eltheric Ocean from the doomed continent, Aldmeris.[3] The city was also the location of the original charter of the Mages Guild, one of the biggest organizations dedicated to the practice and study of magic.[4]

Firsthold is built at the highest point of the island, in the northwest, which mostly consists of steep ridges and sparsely-sprawled forests of laurel and maple trees.[5] The southern gate leads to an idyllic road that goes down the hill and runs through the forest until it reaches the coastal-town, Greenwater Cove. The eastern gates goes across the river and runs through the northeast woodland that makes up most of the region. In the historical-fiction, King Edward claims that the residents of Firsthold live high in the trees, taking what Auri-El has offered.[6] Technically speaking, this statement is correct in a certain sense. Its people do live high above the ground, as the city lies atop the colossal and steep cliffs of the north coast and juts out into a wide promontory that goes above the Abecean Sea. The only way to enter the city from the beaches is through a well-guarded hollow that is large enough to fit ships and the port-town.[5] Inside the walls, the city contains gleaming spires,[7] and royal parks. The Diceto River flows through the entire city in a y-shape and kanthleaf is found all over the riverbank.[8] At the north end of the city, walled-off from the rest of Firsthold is the seat of power, the Firsthold Castle. It looks across the great expanse of the sea. Off the coast of the city is a small island called Calluis Lar, which is often used by local pirates.[7] Firsthold is neighbored by several settlements, including West Guard to the far southeast.[2] 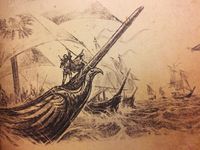 Depiction of the Lay of Firsthold 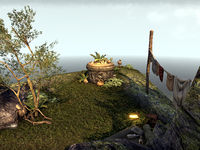 Firsthold is one of the oldest cities in Tamriel, built by the Aldmeri refugees that escaped the destruction of Aldmeris. These early ancestors of the Summerset-Altmer are known as the Ancients, and they were guided to the Summerset Isles by the great ship, the Nine-Prow led by High Lord Torinaan.[1][11] The fleet landed on the northernmost tip of Auridon, now called Nine-Prow Landing and followed Torinaan, who claimed the newfound land as its new Kinlord. They built their new settlement, the "First among Holds" and disembarked across the region to further expand their colony. They built their kinhouse in the north end of the town, and made gardens and forges. However, the region was still untamed and dangerous, riddled with predators like the welwa, and the faerie-folk, the gheatus and the ilyadi.[12] Torinaan led his forces and conquered the island, becoming a hero and paving the way for more kinholds across Summerset.[3]

By the early years of Summerset society in the Mid-Merethic Era, Firsthold was a prominent port-city and it was the staging ground for expeditions across mainland Tamriel. Three ships were chosen by the lords of the Crystal Tower to explore uncharted territories and find a way back to Old Aldmeris, however, records of only one of these ships have been lost in the annals in time. One of the ships, the Pasquiniel manned by Illio was sent south toward Pyandonea while the other, the Niben manned by Topal the Pilot, was sent to the northeast toward mainland Tamriel. They went on their way for eighty moons and only the Niben returned. It returned with gold, spices, furs, and strange creatures. It is theorized that if Topal did in fact sail straight-northeast, he would have landed in somewhere around modern-day Anticlere. Since then, Topal and the Niben came back and forward from Firsthold while charting Tamriel's sea lands and even until he discovered the Niben River.[13] 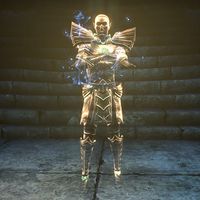 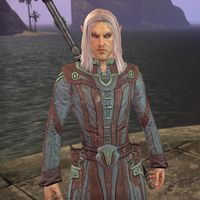 At some point after Torinaan's reign, Firsthold was ruled by the royal House of Rilis, whom ruled over the city since as long as the Altmer lived on the island.[14] It started with High Kinlord Rilis I and continued for many centuries later, each ruling from the old Castle Rilis.[15] They each wore the Rilis Helm, an ancient helm that is described as the clan's source of power, but their curse.[16] It was worn on several occasions like when Rilis III donned it at the Battle of Ten Maws.[17] As the Kingdom of Summerset expanded, more and more cities were built and soon rivaled the likes of Firsthold. Throughout the First and Second Eras, the city of Firsthold was in constant conflict with their sister city, Skywatch, and internal conflict with them often evolved into full-scale warfare.[12] By the third century of the Second Era, Firsthold was ruled by High Kinlord Rilis XII. Prior to his rule, the land was in turmoil but the young Rilis XII brought order and peace to the country. But in the years afterward, the High Kinlord thirsted for power even beyond his kingdom.[18][19]

In the midst of his rule in 2E 230,[20] the aspiring mage, Vanus Galerion gathered magic-users, from students to artificers across the Summerset Isles and brought them to his conclave in the urban center of Firsthold to form the earliest form of the Mages Guild. Galerion wanted to spread the knowledge and practice of the magic arts, and even sell magical items like potions and spells. His actions brought him before his former master, Ritemaster Iachesis of the Psijic Order and High Kinlord Rilis XII, where he was forced to explain his intentions.[4] The formation of the conclave incited fear among the people, since it was widely agreed that magic practice was best done away from people. Rilis XII felt that he could use this as an opportunity to play the mages and the people against each other for his own agenda.[21] A transcript of the event was not documented, but regardless, Vanus Galerion's conclave was approved, and the newly-formed Guild of Mages had quickly spread across Tamriel.[4] At around this moment, Rilis XII had dabbled with the dealings of the daedra and the dark-side of magic. All of it had finally caught up to him and he was sentenced to the Banished Cells, where he died in prison in the 22nd of Frostfall.[22][23] 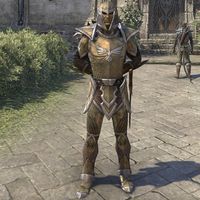 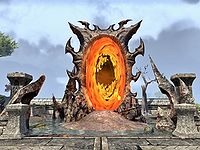 An Oblivion Gate in the Castle Courtyard

In his place, he was succeeded by his son, Rilis XIII sometime around 2E 580.[5] He was the first monarch to not rule from Castle Rilis, deciding to rule from inside Firsthold than the old castle or the actual capital of the region.[15] In that same year, Princess Ayrenn returned after years of traveling the world until the death of her father, King Hidellith. She arrived into Firsthold's docks of North Beacon and was escorted to Firsthold Castle, where they took part in a grand feast hosted by Rilis XIII. Many notable figures were present at the dinner, such as the Court of Alinor, Telenger the Artificer, Prince Naemon and his fiancee, Estre of Skywatch. Even an envoy-scholar of the Empire was present at the time.[5] Ayrenn returned to the main island and was fully recognized as the Queen of the Summerset Isles.[24][25]

Not long after, she founded the First Aldmeri Dominion with the Bosmer of Valenwood and the Khajiit of Elsweyr. Two years later in 2E 582, Queen Ayrenn and her entourage traveled to Auridon, where she toured across the region to meet with her people and commune with the dead per tradition. Much to the dismay of many, it was revealed that Estre was the leader of the Veiled Heritance, a radical group of High Elves that wanted to topple the Dominion and Ayrenn's reign. The High Kinlady escaped Skywatch and made a proposal to Rilis XIII not long afterward. The High Kinlord declined her offer and privately told her that Firsthold shall remain neutral in the affair and only serve to protect Auridon.[26] Now working with Mehrunes Dagon, Estre began her last resort and razed the small-town, Dawnbreak with daedra. It was revealed much later that the attack was only a diversion for a much larger target, Firsthold.[27]

High Kinlady Estre had entered Firsthold and opened the gates of oblivion to the dread Deadlands, unleashing the daedra across the entire city. She then placed a barrier over Firsthold Castle, blocking it off from the rest of the city. Battlereeve Urcelmo of the First Auridon Marines led the retaking of Firsthold and made his way to the local Mages Guild, where he hoped to devise a plan to open the shield. The Battlereeve enlisted the help of an Agent of the Dominion to crack down on the barrier's wards all over the city.[28] With the wards dismantled, there was a final assault on Castle Firsthold, where the Agent had to now close three oblivion gates to the Refuge of Dread. One by one, Estre's forces were dwindling until she hold herself in the final gate and took Rilis XIII as her hostage. The Agent had stricken down Estre in the Deadlands and was able to rescue the High Kinlord before the gate had collapsed. Firsthold had been liberated but the destruction was too great.[29] Much of the city was in ruins and even the Great Library's archives were destroyed in the chaos.[30] The Agent provided to be a more then valuable asset to the Aldmeri Dominion, and so their assistance was needed in Valenwood. They were soon en-route for Haven on the south coast.[31] 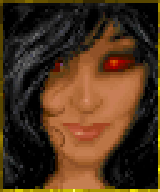 During the Imperial Simulacrum in the late-Third Era, the city-state of Firsthold was an active settlement. It was ruled by King Kalalian and had a rivalry with Cloudrest.[1] Sometime around the turn of the fifth century, the city was ruled by King Reman Karoodil, whose son later died around in 3E 405. At around this time, he was encountered by the King of Worms, Mannimarco, who provided Reman the means to communicate with his dead son for a short time. In exchange for this service, the King became engaged with the Princess of Wayrest, Morgiah and officially married three years later in 3E 408.[32]

Their union was controversial to the people of Summerset, while it garnered significant support from the province's youth and the nascent revolution in the later years of the Third Era.[12] However, it did bring contempt to the people of their kingdom, from their highest officials in the capital to their peasant population in the country, the latter of which began calling her, the "Black Queen." One of the most notorious examples was the case with King Reman's chief concubine, Lady Gialene of Skywatch and the local Trebbite Monks, whose schemes led to a revolution within Firsthold. They were unprepared for Morgiah's skills as a tactician and the culprits were swiftly dealt with. Gialene was exiled back to her home.[7] By the waning years of the Third Era, the couple had two children, Goranthir and Rinnala, both of whom stood to inherit the throne.[12]