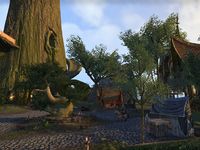 Woodhearth is a coastal city in southwestern Valenwood and the capital of the Greenshade region.[1]

The city was constructed by the Second Empire in the late First Era to act as an Imperial outpost with the aim of facilitating trade with the native Bosmer. Imperial-style buildings, port, sewers and walls in the settlement were constructed back in that time. The Bosmer had mixed reactions to Imperial presence. After several violent attacks against the settlement, a peace was eventually struck with the Green Pact Bosmer tribes and a Bosmer settlement was created adjacent to it. Natural Bosmeri architecture began to replace the Imperial original buildings, which were gradually replaced or fell into disrepair, though the city in general thrived. As the Bosmer secured their place within the Empire, control was gradually ceded back to autonomous Bosmeri rule and a treethane began to rule over the cosmopolitan population, having a reputation for determined leadership and fair judgment.[2] With Woodhearth treethane ascension to power, the city became the capital of the Kingdom of Greenshade, one of the six independent kingdoms ruled by local Bosmer nobility who were under the Second Empire banner and protection in Valenwood. Soon, the city rose from a fortified trading post to both a busy port and a mighty bastion.[3]

During the Akaviri Potentate, in the early Second Era, the Maormer from Pyandonea launched an incursion in southern Valenwood, landing and sacking Haven and Woodhearth and marching inland towards Elden Root, where they plundered the settlement and the very Elden Tree before returning to the sea.[4]

In 2E 580, Woodhearth was one of the settlements in Greenshade which were incorporated into the First Aldmeri Dominion. Soon after its admission into the Dominion, the Thalmor established an outpost on the port city to oversee the region and many settlers came from the Summerset Isles, replacing many of the old Imperial-style buildings with Altmer-style ones. Woodhearth so became one of the principal mainland ports in Greenshade, along with Seaside Sanctuary.[1][2] In 2E 582 and after the death of Prince Naemon, Vicereeve Pelidil assumed leadership of the Veiled Heritance and stole the Staff of Magnus from its vault in Marbruk. An Eye of the Queen tracked Heritance activity in the sewers of Woodhearth. There, both the agent and the Vestige tricked a Veiled Heritance militant to try to murder the agent, who was magically disguised as Queen Ayrenn, discovering this way that Heritance soldiers were hiding in the abandoned Imperial prison of Woodhearth, where they tried to assemble an army to conquer the city. Having their plans foiled by the Vestige's intervention, the Heritance retreated to Seaside Sanctuary with their Maormer allies. After this disturbance was solved, the city remained in the Dominion until its eventual dissolution.[1]

In 2E 830, the city was again annexed by the Second Aldmeri Dominion after the intervention of Summerset in another Camoran civil war.[5] However, the catastrophic use of the Numidium by Tiber Septim resulted in the conquest of both the entirely of Valenwood and the Summerset Isles in 2E 896, ending the Second Aldmeri Dominion control of the settlement, which was incorporated to the Third Empire.[6]

During the Third Era, the city remained in Empire hands except for the Camoran Usurper Rebellion between 3E 249 and 3E 267.[7][8] In 3E 397, during the War of the Blue Divide, as part of the Imperial Simulacrum wars, the Summerset Isles surrounded Woodhearth with the intent of starving its inhabitants and forcing them to surrender. Amidst the Imperial Simulacrum, the city-state of Woodhearth was an active settlement. It was ruled by Queen Laredra, and it had a rivalry with Greenheart. Woodhearth was neighbored by several settlements, including Cori Silmoor in the far northeast, and Vullain Haven to the southeast.[9] Since the Bosmer practice cannibalism, the attack was presumed to have been a tactical error on Summerset's part. A humorous contemporary remark stated that "at the end, only one fat wood elf will remain to wave the flag".[10] The Oblivion Crisis that ended the Third Era and weakened the Empire provided the opportunity for the Thalmor to seized the Summerset Isles. In 4E 29, a Thalmor-backed coup overthrew Valenwood's government, routing Imperial forces and their Bosmer supporters. Alinor and Valenwood then proclaimed a union, and a new Aldmeri Dominion was formed. The city fell into Aldmeri hands for the third time in history.[11]

Woodhearth is considered one of the safer places in Valenwood for foreigners, despite skooma smuggling beyond the city's streets and the infamous Bosmer thieves. Beside drugs dealing, contraband of other products are also common through its extensive and partially abandoned Imperial sewers.[12][13]

Ironically, during the construction of Marbruk in the Second Era, it was reportedly the relatively "civilized" Bosmer living in cites like Woodhearth who voiced the greatest opposition to the destruction of Valenwood foliage. The Green Pact Bosmer, meanwhile, showed more fascination than anything else.[1][14]

A certain type of three-finger-hole nose flute, known among musicians, was manufactured by city's artisans.[15]

This Lore-related article is a stub. You can help by expanding it.
Retrieved from "https://en.uesp.net/w/index.php?title=Lore:Woodhearth&oldid=2183900"
Categories:
Hidden categories: