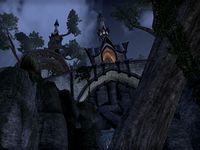 Greenheart is a city in southern Valenwood, in the region of Greenshade, southeast of Longhaven and southwest of Bramblebreach.[1]

Greenheart is situated near the southern coast of Greenshade. The city is a walled settlement, built upon magic-made cliffs and giant trees, which supports Altmer-style buildings.[2] Greenheart is neighbored by several settlements, including Marbruk Field to the northwest, and Tarlain Heights to the northeast.[3]

Crowning Greenheart, sits the Tower where the Throne of the Wilderking is, made from both marble and living magic-shaped trees.[2]

The city's history and the one of the mysterious Wilderking are intertwined. The first Wilderking was an Altmer mage sent by his overlords to Valenwood to build a great city during the early First Era.[4] He chose the place where Greenheart currently stands to fulfill his purpose, before he even became the Wilderking. There, the Altmer builders met to help the mage, but after a violent struggle between the forest and the colonists, who were trying to build Greenheart, all ended up dead except for the mage, who forgot about his previous memories. The forest has agreed to obey the mage if he became the Wilderking. From the dead builders, he raised the first of the Hollow, who would become the guardians of the Wilderking and, therefore, of Greenheart. The initiative was forgotten by the Wilderking former overlords, but the new god-king shaped the ground and the trees to build his capital city. He grew a big graht-oak in the middle of the settlement, which served him as the seat of his throne. In time, the Bosmer from southeastern Greenshade began to recognize the Wilderking as their only and supreme ruler: making Greenheart the capital of a region that would come to be known as the Wilderking Court.[4][5][2]

In 1E 2714, Valenwood was conquered by the Second Empire, after centuries of unrelenting warfare along the border with Cyrodiil and a plague from Thras.[6] Although the province became occupied by the Imperial Legion, they continued to experienced resistance from some natives for several years and the actual occupation of Greenheart and the surrounding Wilderking Court by the Second Empire or their Bosmer allies from Woodhearth never took place. Their Bosmer inhabitants were known as having been always "feral" even by their own kind.[7][5][8][9]

During the Second Empire rule of Valenwood, each of the treethanes of Falinesti, Silvenar, Haven, Cormount, Elden Root, and Woodhearth were given a minor kingdom, rising from local to regional powers. This way, Valenwood was divided into six independent kingdoms ruled by local Bosmer nobility, but under the Second Empire banner and protection. The nearest kingdom of Woodhearth probably did not have actual power in the Wilderking's domain.[6][10][11][9][8] However, despite its isolation, the city was well-known across Tamriel by this time.[12]

In 2E 580, Greenheart, along with the other Bosmeri settlements in the Wilderking Court, refused to be incorporated to the First Aldmeri Dominion along with the rest of Camoran-controlled Valenwood after Blacksap Rebellion was put down by Ayrenn and Aeradan Camoran joined forces. The treethanes and the common people said that they did not recognize the Camoran king of Elden Root as their ruler, but the elusive Wilderking, who resided in Greenheart.[13][14]

Due to local resistance in the region, Marbruk was built by Altmer colonists in northern Greenshade, with a civilizing purpose, only to make the situation worse. By 2E 582, Marbruk building was complete, but the Wilderking Court region of Greenshade remained to be an independent part of Valenwood. So, Ayrenn asked the Vestige for help with the negotiations with the so-called Wilderking. This one discovered that an Altmer woman mage was destined to be the next Wilderqueen, but she was influenced by the Veiled Heritance, who tried to kill the Wilderking and crown her Wilderqueen to conquer Greenshade for his own purposes. In trying to do so, the Heritance invaded and burnt Greenheart, which became uninhabited after that destruction, but the Vestige defeated the supremacists and helped the new Wilderqueen to accept her apotheosis. In the end, the new god-queen of the now-ruined Greenheart agreed to join the Dominion in their fight against the Heritance. This situation remained until the eventual dissolution of the Dominion.[15] The city eventually was rebuilt and turned again a major city and a regional center of political power in Valenwood.[16]

Around 2E 582, an agent of the Psijic Order recovered the Green Sap Fragment of the Staff of Towers from Greenheart.[17]

Again in 2E 830, a Second Aldmeri Dominion was formed after the intervention of Summerset in another Camoran civil war.[18] However, the catastrophic use of the Numidium by Tiber Septim resulted in the conquest of both Valenwood and the Summerset Isles in 2E 896, ending the Second Aldmeri Dominion. Greenheart, along with the rest of Valenwood, was subsequently incorporated to the Third Empire.[19]

Since the beginning of the Third Era, Greenheart became part of the Province of Valenwood and grew up to become a settlement as large as Woodhearth or Haven and connected with Imperial roads to the neighboring cities and villages, at the same time, the once-proud Marbruk was reduced to not more than a village.[20] The city remained in Imperial hands except for the Camoran Usurper Rebellion between 3E 249 and 3E 267.[21][22] During the Imperial Simulacrum in the late Third Era, the city-state of Greenheart was an active settlement. It was ruled by King Colas, and it had a rivalry with Eldenroot and Woodhearth.[16] The Oblivion Crisis that ended the Third Era and weakened the Empire provided the opportunity for the Thalmor to seize the Summerset Isles. In 4E 29, a Thalmor-backed coup overthrew Valenwood's government, routing Imperial forces and their Bosmer supporters. Alinor and Valenwood then proclaimed a union, and a new Aldmeri Dominion was formed. The city probably fell into Aldmeri hands, like the rest of Valenwood, for the second time in history.[23] 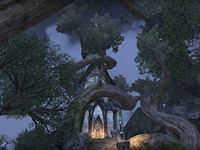 Tower of the Wilderking's Throne

Greenheart was directly ruled by the Wilderking or Wilderqueen, and it is where Wilderking's Throne stands, at least until the mid-Second Era.[24] It is unknown if the town was still under a Wilderking's rule or a Bosmer ruler by the time of the Imperial Simulacrum.[16]

Nereid's Smile flowers, commonly praised by Valenwood couples as romantic, used to grow near the Altmeri structures in Greenheart, but by 2E 582 they were all gone. However, the Vestige agreed to plant seeds around the grove so the flowers may grow again.[25]