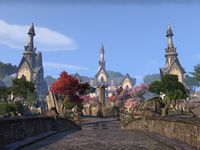 Skywatch is one of the eight major cities in the Summerset Isles,[1] being situated along the eastern shore of the island of Auridon. Skywatch was the capital of Auridon during the Interregnum.[2]

Skywatch is built upon cliffs bordered by sparkling seas. The area around the ancient city is dotted by the ruins of Aldmeri fortresses and seaports.[3]

The docks are located to the south, facing the bay between Skywatch and Mathiisen. The Palace is sat atop the western cliffs, which were once protected by Hightide Keep.[4] Skywatch has many spires dotting its skyline.[5] The architecture in Skywatch is a refined, harmonic take on orthodox Altmeri style.[6] The streets of Skywatch are adorned with elegant fountains and manicured gardens.[7] Skywatch is neighbored by Silsailen Point in the west and West Guard in the north.[1]

Skywatch, Errinorne Isle, and Buraniim Isle made up the Buraniim sea-complex during the Middle Merethic Era. Skywatch used Errinorne isle as a shipping and warehouse complex.[3] Skywatch was founded after Firsthold,[8] and both two cities became the political centers from which Auridon was ruled, not without internal conflicts which often sparked into full war during the First and Second Eras.[9] 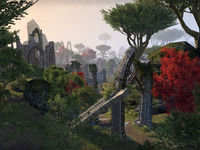 Early in its history, Skywatch had a sister city to the north, Ezduiin, ruled by House Duure.[10] Ezduiin was once an elegant town, built as a testament to the greatness of the Ancients. Trade and travelers flowed through Ezduiin, right up until the end. Essanyon Duure, the leader of an apocalyptic cult, chose Ezduiin as the cite of a blood sacrifice. He claimed that the gods told him an apocalyptic event was coming, and that the only way to stop it was to sacrifice an Altmer of noble blood. He began to preach all across the Summerset Isles, and his cultists came together at the heart of Ezduiin to sacrifice a Skywatch nobleman during a ceremony. Someone informed the noble of Essanyon's plot, and he refused to attend. Essanyon sent his followers to slaughter a manor full of royalty in retaliation. The Skywatch Guard came marching upon Ezduiin in the wake of the attack. In his desperation, Essanyon used a magical relic called the Mallari-Mora and killed every soul in town, binding them forever to Ezduiin.[11][12] House Duure was erased from history, and their town became a cursed ruin.[10] Telenger the Artificer led an expedition to the ruins in 2E 582, where the Vestige helped him and his reverse the curse and recover the Mallari-Mora.[13][14] 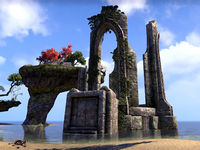 Ruins of Hightide Keep circa 2E 582

Skywatch has been terrorized by the Sload since its founding. Infamous for their mastery over necromancy, they conjured sea monsters along the coast and laid siege to Skywatch.[15] Hightide Keep was once a sprawling complex of defensive fortifications, built during the Late Merethic Era and painstakingly maintained and manned. As a result, Skywatch was able to put up a sturdy defense during the Sload's attacks on the city. In 1E 1301 the slug-folk launched an attack during which powerful magical constructs were deployed and dozens of Sload warships were destroyed. The city finally fell when a Sload Warcaster filled his voluminous gullet with volatile alchemical reagents and threw himself at the base of the cliffs. The resulting explosion toppled much of the extended rock face, and plunged Hightide Keep into the sea.[16] The siege ended in the infamous Sack of Skywatch, which is regarded as one of the most terrible events in Tamriel's history.[9] The Sload occupied the Buraniim sea-complex for decades after. The occupation ended with the arrival of the All-Flags Navy in 1E 2260.[3][17][18] Even after Thras sunk, the city suffered the War of the Uvichil, a full-scale invasion launched by the Sload from 1E 2911 to 1E 2917 and the last time the slug-folk invaded Auridon.[15] The Festival of Defiance has been celebrated in Skywatch every year since the city was retaken from the Sload.[19] 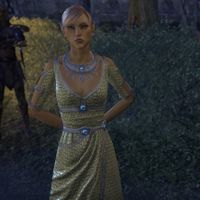 High Kinlady Estre, the Veiled Queen, and ruler of Skywatch

Ayrenn eventually returned to the Summerset Isles to claim her throne after King Hidellith's death. Before that, her younger brother Prince Naemon was betrothed to High Kinlady Estre of House Errinorne, the ruler of Skywatch.[20][21] Estre wanted dearly to become queen,[22] and Naemon was partway through the extensive rites of ascension required for Alinor's rulers to ascend the throne.[23] Ayrenn's return was a sore spot for the couple.[6]

After the sudden and unexpected formation of the First Aldmeri Dominion and the start of the hostilities on the mainland in 2E 580, Auridon opened its borders to visitants from Valenwood and Elsweyr. Some of the new arrivals were immigrants who sought to establish themselves in Auridon, though many were merely visiting travelers.[24][25] Around this time, unrest began to stir among the native Altmer. Immigrants to Auridon were not unheard of, but now they could work in equal conditions and live in the island without further restrictions. This situation eased the formation of the Veiled Heritance by High Kinlady Estre, the Veiled Queen.[26]

As the leader of the Veiled Heritance, Estre sought to supplant Ayrenn, dissolve the Aldmeri Dominion, and expel all non-Altmer from the Summmerset Isles.[27] To this end, Estre's followers employed terrorist tactics, and established diplomatic ties with both the Maormer and the Ebonheart Pact.[28][29] The Maormer High Command planned to conquer Auridon, seeking to allow Estre the position of viceroy under Maormer suzerainty. Estre had no intention of allowing this to come to pass.[29] While Ayrenn knew that Estre was bitter for having lost her chance at the throne of Alinor, Estre's identity as the Veiled Queen remained a closely guarded secret. As such, Ayrenn sought to smooth over relations with Estre. The Kinlady was granted higher position in the Thalmor in an effort to placate her, and the queen visited Estre in Skywatch to partake in a formal ceremony for this purpose. However, the ceremony was interrupted by an Eye of the Queen, who disclosed Estre's true identity to Ayrenn after infiltrating the Heritance's secret training facility in Aldmeri ruins on the island of Errinorne, which was presumed to be abandoned. Estre was present when this information was delivered, and promptly escaped through a portal.[30][31]

Skywatch during the Imperial Simulacrum

During the Imperial Simulacrum, Skywatch was ruled by High Kinlord Kalalian.[32] During this time, Queen Morgiah was married to the High Kinlord Reman Karoodil of Firsthold. By the late Third Era, Gialene, daughter of the High Kinlord of Skywatch, member of the court of Firsthold and concubine of High Kinlord Karodiil sought to replace the "Black Queen" as Reman's wife by means of a peasant rebellion. Part of the city's nobility and priesthood were complicit in the plot. Those involved resented the fact that Morgiah was a Dunmer, and believed her unfit for her role in Firsthold's court. However, Morgiah achieved to put down the open rebellion with unconventional tactics of battle. Thereafter, the traitors were executed, and Gialene was sent back with an escort to her father's court of Skywatch.[33]

The Oblivion Crisis, which ended the Third Era and weakened the Empire, provided the opportunity for the Third Aldmeri Dominion to form. The Thalmor, now a political faction that espoused Elven superiority, painted themselves as the saviors of the Summerset Isles during the Crisis. In 4E 22, the Thalmor solidified their position and seized total control of the Summerset Isles, including Auridon, renaming the nation Alinor after the former royal capital. Little is known about the fate of Skywatch during the Fourth Era.[34] 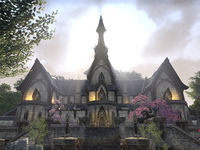 Skywatch has been an integral part of the realm of the Summerset Isles since its foundation. It is one of the two High Kinholds of the island of Auridon, ruling over the southern part of the region.[20][35] Since the Late Merethic Era, Skywatch has been ruled by House Errinorne,[36] whose members are also descended from royal Aldmeri blood.[20] City administration is left to a Canonreeve, appointed directly by the High Kinlord or Kinlady.[37] 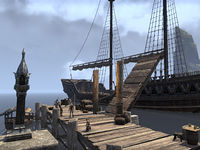 Skywatch's docks are visited by vessels from across Tamriel.[19] However, foreign sailors are confined to the docks and discouraged from leaving their ships, adding a layer of difficulty to doing business with the local Altmer.[5] Its port is third in importance on Auridon after those of Vulkhel Guard and Firsthold.[38][6][39] The Darkvale Costers are a prominent group of Altmer merchants who operate out of Skywatch, importing and exporting goods by sea. Their exports include alcoholic beverages,[40] which they sell as far as Morrowind.[41]

After the high vaulted halls of Bewan, originally built in the Merethic Era as a shrine to Trinimac were abandoned early in the First Era, the priesthood moved to the grand Trinimac Chantry outside Skywatch, which turned to be the main center of worship of the warrior god of the elves in the Summerset Isles.[42][43] 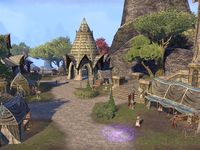 Brass and silver jewelry crafted in Skywatch are famed even outside Auridon.[44][45] Perhaps due to its position and wealth, Skywatch is also the "capital" of skooma black market in the Summerset Isles.[46][47] Criminals prefers to stay near the docks, where its busy activity can hide them from the authorities and provide an easy escape route.[48]

The Festival of Defiance is the largest event in the Summerset Isles and one of the most crowded of all of Tamriel.[24][25] Everyone who comes to the city during this time must pass an inspection before entering through the city's gates.[49] Many outlanders come to the city during the festival, flooding Skywatch's streets with their traditional beverages and foods. Among the festivities present at the celebration are performers such as jesters and bards,[24][25] as well as frog races.[50] Wood Elf immigrants to Auridon during the Second Era introduced the locals of Skywatch to Mud Ball Merriment, a Bosmer New Life tradition which consists of citizens throwing balls of mud at each other.[51]

Unlike Vulkhel Guard, Skywatch's native Altmer citizens are reputed to be snobbish[52] and unwelcoming to outsiders.[53] Skywatch's cafes had a reputation for being laid-back places where individuals from all walks of life could were welcome.[54][24][25]

After the destruction of their defenses and trading facilities back in the First Era, the calm Buraniim Isle is mostly used most often as a retreat from the city life in nearby Skywatch.[55]

The Mages Guild had quite a large Guildhall in Skywatch in 2E 582.[56] Despite their prestigious reputation, some of the Skywatch Guild members, including high-ranking members, are rumored to be engaged in smuggling of arcana and relics off of Auridon.[57] The expansive Aldmeri ruins under Skywatch were off-limits, and were guarded by the Mages Guild under Telenger's orders. The artificer sealed the entrance in the royal gardens with a magical barrier.[19][58]