This article is about the Altmer on Auridon. For the Ayleid ghost in Malabal Tor, see Elanwe. 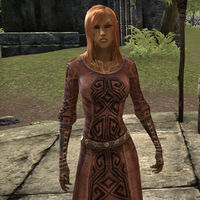 Lady Elanwe is an Altmer woman who can be found near Castle Rilis. She was a mistress of High Kinlord Rilis XII, and fears that her son, Sorondil, will get himself killed trying to prove that he is a Rilis.

Approaching her near the castle, she can be heard calling to her son, "Sorondil! Sorondil, please! Come back!" If you have not yet received the related quest, her dialogue is as follows:

"That silly, stupid boy. He's going to get himself killed."

"My son, Sorondil—scion of the last High Kinsman, Rilis the Twelfth. I... I was Rilis's mistress. And now my son risks his life for some fool treasure."

If you have already started the quest through an alternate questgiver, the dialogue is slightly different:

"That silly, stupid boy. He's going to get himself killed in there."

A crazed person on the beach mentioned you. What's wrong?

"Sorondil is scion of the last High Kinsman, Rilis the Twelfth. I... I was Rilis's mistress. And now my son risks his life for some fool treasure."

The further lines are the same in either case.

What's his plan?
"He wants to prove himself to his ancestors. He thinks there's some sort of treasure, deep in the vaults. Sor wants so badly to be a Rilis.
I just want him to be safe. Please, will you look after him?"
I'll do what I can.
"We don't know each other, stranger. But you have a mother's gratitude for your kindness."

Can you tell me about the Rilis family?

"The high family of Firsthold, House Rilis has ruled this part of Auridon for centuries. In the past, it was known as a proud line of warriors.
Until the last Rilis, that is."

Who was the last Rilis?

"Rilis the Twelfth. They called him a despot, a murderer. He communed with Daedra. Committed horrible acts in the depths of his palace.
For his crimes, he's trapped here. In the banished cells beneath the castle."
Didn't he help found the Mages Guild?
"Ha! To hear him tell it, it was all his idea. Vanus Galerion, First Mage of Firsthold, was the real founder of the guild. Rilis just allowed him to do his work in the city.
I heard rumors he even bargained with Galerion for access to Oblivion."

The last Rilis? Who is the current Rilis?

"Rilis the Thirteenth. The legitimate heir of the despot Rilis the Twelfth—Sorondil's half-brother and current High Kinsman of Firsthold.
He's a good man, I hear. Less scarred by the acts of his father than Sorondil."

You were the mistress of a High Kinsmen?

"I was. I think I loved him. But the tales of Daedric power he was given... even the power to control the minds of mer...
What if I never... what if I never really loved him?"

Once you've helped Sorondil defeat the three captains and the vault has been unlocked, she will run up to the entrance saying "Sorondil, what's happening? What did you do?"
Sorondil will say, "Don't worry, mother. It's safe now. Trust me." If you talk to Elanwe now, she does not seem convinced by her son's words: "What did you do? Why are the guards so hostile?"

Once you've spoken with Sorondil, inquiring about his mother's well being above ground, you can speak with her to which she'll implore you to keep her son safe: "Keep him safe down there, please. The Rilis line is strewn with hard hearts and cruel men."

"The guards are quiet again. Something's happened.
Where's my son? Where's Sorondil?"
I'm sorry, Elanwe. He's gone.
"Gone? How?
What happened down there?"

[Lie] He took the helm and fled through a magic portal. I don't think we'll ever see him again.

"You did what you could. I somehow knew it would end this way.
Thank you for listening to a mother's plea. I'd like to be alone now."

The helm's magic overwhelmed him and he attacked me. I had no choice. I had to kill him.

"You did what you could. I somehow knew it would end this way.
Thank you for listening to a mother's plea. I'd like to be alone now."

If you say "Goodbye" and speak with her again after making the choice but before ending the quest, she'll say :"My poor, sweet boy."

If you speak with her after ending the quest, she'll say :"Please, go. I... I want to be alone with the dead right now."