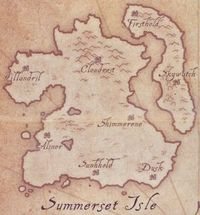 Cloudrest is one of the eight major cities in the province of the Summerset Isles,[1] situated on the highest slopes of Eton Nir. Cloudrest is colloquially known as the "Aerie of the Altmer", and despite the fact that it is set high on the tallest mountain in the province, the air is heady and invigorating.[2] The people hold the city in high regard and claim the great plains of Summerset for themselves.[3] Cloudrest is the home of the Welkynar Gryphon Knights, the knightly order of gryphon riders that protects the region since the early years of Altmer history on the island. They have chosen Cloudrest because of its high vantage point from the entire island.[4]

The Banner of Cloudrest

Cloudrest is built on Eton Nir's southern face, in a deep river valley that drains into the bay on the island's west-central coast. It is, in fact, built throughout the river valley, at the top on the mountain side and at the bottom on the river canal. The road toward the city is found off the main road, along the river that flows from the mountain. The brook lies between the mysterious forest of Ebon Stadmont, and the island's central fields. There is a great big gate at the base of the mountain, next to a waterfall that contains a secret entrance to the city's upper district. Not much is known about the city's lower district, but after the entrance, there is another gate that continues up the hill and into the actual city. The area contains a large river canal, bridges connecting each side of it, as well as diverging streets that further expand throughout the area. The upper district contains an open street and a large bridge that goes over the lower district and into the Aerie. It is said that the view from here is nothing but breathtaking.[5] One of the most notable landmarks in the city is the Baron's Maze, which is described as a "confusing network of passages."[6] Underneath the cities is a myriad of ancient ruins from times long forgotten, the oldest of which are made from coral, much like the structures made by the Sload of Thras.[7] Cloudrest is neighbored by several settlements, including Karndar Watch to the east, Kings Haven to the north, and Old Falls to the south.[1]

It is said that the ancient Altmer encountered creatures and prehistoric civilizations back when they first colonized Summerset, and that the city of Cloudrest is a testament to these times. It was built in an odd mixture of different architecture styles with buildings like strangler vines, all of which built atop of older structures. The oldest ruins are generally made from coral, suggesting that the Sload have occupied the region at some point.[7] 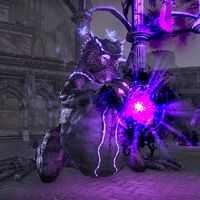 Z'Maja of the Abyssal Cabal

Sometime in the Second Era before 2E 580,[10] the Canonreeve of Cloudrest, a well-respected noble from a family of great prestige, was convicted of smuggling treasures and relics from Eton Nir's various ruins to places on mainland Tamriel. Rumors of these dealings had reached the justiciars of the Divine Prosecution, who conducted an intense investigation on the Canonreeve. They found that he altered manifests and records to sell these antiquities to foreign collectors, all the while erasing any traces of their disappearances. The incident had since been called the "Case of the Disloyal Canonreeve."[11]

In 2E 582, the Welkynars, led by Relequen had battled the Sea Sload sorceress, Z'Maja and imprisoned her in the Aerie of Cloudrest. Despite Galenwe's caution, the knights reveled in their victory. Galenwe studied the Sea Sload's unique form of shadow magic, which he believed to come from the jewel she wore. Among the knighthood, Galenwe was the only one that showed an suspicion, especially because of the dangerous miasma she created.[12] Despite his fail-safes, the city had succumbed to Z'Maja's dark magic. From the Aerie, the shadowy mist spewed down into the lower district, which caused a severe state of panic in the people. They screamed and clamored for escape, but since the city gates were closed, the gas quickly enraptured them and slowed down their heartbeat. The Welkynar, Olorime was able to save a few people and placed them in the city's upper district, but the damage was done.[13] The other Welkynars were captured and corrupted by Z'Maja's shadow magic and left Olorime with very little options.[14]

Not long after, the Undaunted assembled a motley crew of adventurers and stormed the Cloudrest Aerie. There have been various accounts of what took place in the siege. In most cases, the possessed Welkynar and their army of shadow imitations were stricken down one at a time until the final confrontation with Z'Maja in the center of the fort. However, in other cases, the Undaunted attacked Z'Maja head on and freed the other Welkynars from their captivity. In any case, the city was saved from the Sea Sload[15] and Olorime was at the forefront of rebuilding Cloudrest, despite the lack of support from bureaucrats.[14]

During the Imperial Simulacrum in the late Third Era, the city-state of Cloudrest was an active settlement. It was ruled by King Kelkemmenar and had a rivalry with Firsthold.[3]