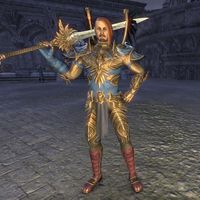 Galenwe is one of four Welkynar Knights. During the fall of Cloudrest he is corrupted by Z'Maja and fights for her as a shadowy clone. If he is defeated alongside Z'Maja in the final battle he is released from her spell and retakes his mortal form.
He fights alongside his gryphon companion, Falarielle.

Once released, he can be found in the center of the Aerie alongside Olorime. If any of the other Welkynars have been killed:

Olorime: "We've defeated Z'Maja, but at what cost?"
Galenwe: "Olorime, whatever happened to me has … drained me of my power. I doubt I'll ever recover. An early retirement for me, I suppose."
Olorime: "No … no, we can't give up hope now! I know we can rebuild our order. Together."
Olorime: "We'll train a generation to protect Summerset, stronger than before!"
Galenwe: "Quite the proposal you have there. Well, we may not have very good odds but … we'll make due. Of that, I'm sure."

You can speak to him here.

"It appears as though my power has been diminished with the loss of my shade. Z'Maja's power truly does continue to amaze, despite the outcome of its use."

If all of the Welkynars have been saved:

"I must say, your victory flies in the face of all logic. Never before have I seen a warrior succeed after facing such great odds against them.
Still, if it wasn't for your recklessness, my order may have been no more. Thank you."