Gryphons (sometimes also spelled griffons or griffins) are large, carnivorous flying creatures with the body of a lion and the wings, talons, and beak of an eagle. They appear in Summerset Isle.

Adult gryphons can often be found near Fledgling Gryphons in the wilds of Summerset. They are also found near gryphon nests, as well as eating prey that they've caught in the wild. A wild gryphon eating prey can be found on the shores of the lake outside Archon's Grove. Gryphon nests can be found at Gryphon Run and Gryphon Aerie, and near Rellenthil. Chances are, if you see a Fledgling Gryphon in the wild, there's an adult relaxing or hunting nearby. While the chicks cannot be harmed, the supervising adults certainly can, and will attack if you get too close. Additionally, aesthetic, non-hostile flying gryphons can be seen consistently in the skies above Gryphon Run, as the area is chock-full of massive gryphon nests.

Gryphons can also be found in the crags of Northern Elsweyr, near Cicatrice and flying around the cliffs of the Ashen Scar. Gryphons have a chance to drop the Antiquity lead for the Prismatic Sunbird Feather.

A large, predatory beast with the head of an eagle and the body of a lion. Impressive, aggressive, and ferocious, this is the apex predator on the Summerset Isles. As a hybrid of two known animals, expect combat both on the ground (lion form) and in the air (eagle form). — Prima guide description[1]:215

Grounded combat is referred to as "lion form" by the official Summerset Prima guide.

Aerial combat is referred to as "eagle form" by the official Summerset Prima guide.

Take Flight
A transitional ability that brings the gryphon from grounded combat into aerial combat. As a Gryphon is preparing to swap into "Flight Phase," a massive AOE will begin to spread on the ground beneath it, knocking back any players standing within. The tell for this ability is when it crouches, giving several preparatory flaps of its wings before swooping upwards.
Sudden Gust
When a Gryphon takes flight, it unleashes a small gust of wind that knocks back whoever it hits. Deals mild physical damage.
Death from Above
When a Gryphon is airborne, it will dip down and swoop back up, dealing major physical damage.
Cyclone
The gryphon twists its body in mid air and unleashes a swirling cyclone with its powerful wings. Deals moderate to major damage.
Aerial Pounce
A transitional ability that brings the gryphon from aerial combat into grounded combat. The Gryphon swoops down at you, knocking you over and dealing major physical damage. If it hits, the Gryphon will land. It usually uses Feast after this.
Feast
The Gryphon mauls you, dealing moderate physical damage over time for as long as you allow the attack to continue. You must break free to stop the damage.
Bird's-Eye View
The gryphon repositions itself, performing a rolling maneuver as it moves. Targets that are in the way while it rolls will take damage. Boss variant gryphons have faster rolls that release small traveling vortexes that damage and snare players. 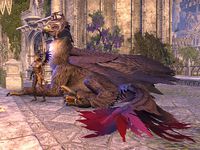